Ross and Josh of The Not So Late Show with Ross & Josh take some time to talk to Voice about the show, inspirations, and to give advice to young people.

Hello! We're Ross and Josh, hosts of The Not So Late Show with Ross & Josh.

We're taking the late night chat show to its illogical conclusion. It's a spoof, alternative comedy chat show with sketches, very special guests, games and videos. Goddamn it, it's a multimedia extravaganza!

Because it's an incredible experience. It's where the very best of the best in comedy, music and theatre come to play and, like envious little imps, we just want to be part of it.

It's just so goddamn big. I think the thing that differentiates it the most is that it encourages people to take an idea and run with it in front of an audience of people who are want to see new, exciting talent.

It's certainly got bigger. This is our first time performing a show at the Fringe, so we can't speak from a performers perspective, but from visiting as a punter, it seems to get ever more sprawling every year.

The fact that it seems to be more expensive to both go and perform is a negative, and I wonder when and where it will reach critical mass. But, in theory, the more opportunities to see or do new stuff is encouraged.

A desire to take be creative on a larger scale. We're inspired by comedians who take little ideas and make them big, or with a commitment to fun and silliness above all else. Vic & Bob are the obvious examples, but Harry Hill, Adam & Joe, The Mighty Boosh and Tim & Eric certainly come close.

Well, we still have our jobs to fill in the gaps! Josh is a video editor and animator and Ross is a broadcaster and professional gambler.

Ross remembers going to see a production of The Return to the Forbidden Planet in Sheffield. Josh can't remember what he did yesterday.

Not really. We do a topical monologue in the show, but the world seems to move at such a pace that it's a full time approach to cater to that side of things. There's a definite time and space for it, but we haven't explored it yet.

I guess we're both liberal minded and we have a few rules when it comes to writing material, but the current public sentiment currently only inspires heated discussions in the car on the way to the gig rather than the material during it.

An exhausting rollercoaster of emotion.

Josh - Gennaro Contaldo. I've been watching a lot of YouTube cookery videos. Either him or Jesus.

Ross - The cast of Saturday Night Live around the time Bill Murray and Chevy Chase were stars. Because it seems like an insane, creative world.

The ticketed events definitely get more exposure and better facilities but the free events give you a little more control. It's much less of a risk financially and probably means you can take more risks creatively.

Have a vague idea of where to start and work your arse off to achieve it. Oh, and get someone else to do all the bloody admin.

It's The Not So Late Show with Ross & Josh and we're at The Pleasance Dome, Jack Dome, 10.45pm for tickets go to www.edfringe.com

The Not So Late Show with Ross & Josh is performing at Pleasance Dome at 22:45 on 2nd - 28th (not 14th). For tickets and more information visit the Ed Fringe website. 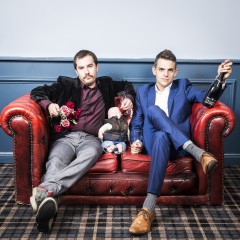 Interview with Ross and Josh

Ross and Josh of The Not So Late Show with Ross & Josh take some time to talk to Voice about the show, inspirations, and to give advice to young people.