Abigoliah Schamaun takes some time to talk to Voice about Namaste, Bitches, inspirations, and gives advice to young people.

Hello my name is Abigoliah Schamaun (have fun trying to work out how to pronounce that). I started stand-up in New York, now I live in London. The three things I love are yoga, whiskey, and my Mom.

Namaste, Bitches is about the pursuit of enlightenment through fitness from a woman who loves fried chicken and bourbon as much as she loves yoga and running. PS. I'm the woman.

Because it's the most manic, artistically inspiring place to be. In one hour I'll cry, laugh, and scream and I don't even have to be drunk; it just brings out the best in me.

All my friends are there. ALL of them. From all over the world. It's like one big reunion.

Hard to say. I haven't seen it for all its 70 years. But I know it has. No matter what, it's still a great place for artists to get down and dirty with live performance. You'll learn more spending a month in Edinburgh than you will doing comedy for years anywhere else.

I went to school for musical theatre. That was the dream - to be on Broadway. Since then everything has taken quite a turn and now I'm a stand-up comedian in London instead. I didn't watch a lot of stand-up growing up. I did watch a lot of I Love Lucy re-runs. I think Lucille Ball is the funniest woman that ever lived.

If you didn't have your current job, what would you probably be doing?
If I hadn't gone into show business, I probably would have majored in environmental sciences and worked for a non-profit and lived in Colorado maintaining a organic vegetable patch and campaigning for sustainable living programs.

Instead I moved to New York. And now I'm a cosmopolitan, £3-latte-swilling yuppy.

If you could have any job in the world, what would it be?
Stand-up comedian. So I'm pretty happy with the way things have worked out.

When my dad planted trees in the back yard me and my sisters and brothers would patiently wait for him to finish digging the hole so we could sit in it and play in the dirt...I had a provincial childhood.

When Trump was elected president I felt like I had to talk about it because I'm an American living in England. But for the most part, no, my job isn't commentator, it's comedian. I write jokes, not think pieces.

No. I tell true stories about myself that I hope people can relate to. With all the negative things that have happened this year, I'm just happy to give people a little escape and a place to laugh.

It's been a bit much.

I'd really like to co-star in a Quentin Tarantino movie with Steve Buscemi. Anyway you can introduce me to those guys?

Abigoliah Schamaun: Namaste, Bitches is performing at Underbelly, Cowgate at 19:40 on 3rd – 27th (not 15th). For tickets and more information visit the Ed Fringe website. 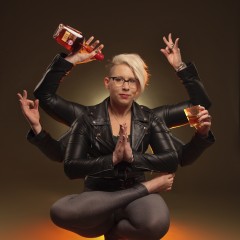 Abigoliah Schamaun takes some time to talk to Voice about Namaste, Bitches, inspirations, and gives advice to young people.