Voice MagInterviewsWant My Job? Aimie A…

Aimie Atkinson is an award-winning actress who was in the closing cast of the West End production of Lin-Manuel Miranda's 'In The Heights'.

She has recently released a solo album titled 'Step Inside Love' and is the winner of the prestigious 'BBC Voice of Musical Theatre' award. She recently sat down with me to discuss her career so far and give some advice as part of the 'Want my Job' series.

I would call myself an actress; it's kind of interesting when you fill in a form online. I think some people put performer or singer but I would say an actress, just because I think, even though it is musical theatre, you're still acting and, even though you're singing and you're dancing, you're still acting through all of those things, so that's what I would put. And what does it entail? A lot of hard work. That's about it really. Hard work and energy!

How did you get into an arts job?

I got involved when I was 19 because a really good friend of mine was auditioning for a competition in the UK called 'BBC Voice of Musical Theatre'. It was like a big competition to find a new musical theatre vocalist. He was auditioning and was really nervous and asked if I would come along and support him, so I did. But on the day that they were auditioning, lots of people had dropped out, so I was waiting for him whilst he was auditioning and this women came out and she was like "Do you want to have a go at auditioning?" and I just thought I would have a go. Anyway, so I did it and ended up getting through lots of rounds and ended up winning!

So I sort of found myself thrown into musical theatre. It was something that I really wanted to do but didn't really know how to get involved in it. I came from a town where it wasn't something you usually did and didn't really know how to get into it. I sort of fell into it really. From doing that competition, I was really lucky because it meant that I had a platform that people knew what it was, and knew who I was and I had auditions and got my agent from that. I was just really lucky. Otherwise I don't know whether it would have happened because I didn't know how it really worked.

Have you also worked outside the arts?

Before that happened, I was a teacher. I taught at Stagecoach and ran my own school in my hometown of Stevenage, it was dance/drama school. I also worked in an office, but again that was in the arts, as it was a music office looking after different artists and things like that. So guess the answer to the question is no…

So many things! The best thing is, it doesn't feel like a job. I think even when it's really tough and the hours are really long and you're rehearsing all day and then doing a show at night or you're auditioning all over the place and you're learning scripts and you're learning routines, it still doesn't feel like it's work. That's the best part; it just feels like I'm having a lovely time and I'm getting paid to do it. You couldn't wish for a better job really!

If you get in a cast and the cast is lovely, which is most of the time, you're basically hanging out with your friends, having a laugh and being silly and getting to do something that's wonderful… it's the best job in the world.

I think lots of people would say the rejection is quite hard - that can be quite difficult. I guess sometimes when you're auditioning a lot and you don't get anything for a long time, that can be quite hard for your ego but really that's just an ego thing and with auditions sometimes you're just not right for it. It's not always to do with how good an actor or dancer or singer you are or you just don't look right or you're not the right shape or size or height. I don't take it too personally but I would say that's probably the hardest part - trying to keep strong and keep believing in yourself whilst people around you are going "No."

Well, before I did In The Heights, really it was that competition, even though it was the first thing I did, it was so magical the way it all happened and that was the highlight. But, then I did In The Heights, I knew about it and remember thinking "Oh, I would love to audition for that show" and I was away when it first came to London, so I didn't audition and I missed out.

So then when it came back around, obviously I got the job and I think the highlight was the last night of the job, because the show was so incredible and the audience was so wonderful and the fans on that show are amazing, they're so supportive and I've never been in a show like it before where people have been so obsessed with the show, and I've never done anything like it since. So I think the highlight of my career so far would be the last show because I've never experienced anything like that before. The audience reaction was just crazy!

Can you describe your biggest challenge so far in your career?

I would say, when you have to play a part that completely opposite personality to you can be difficult. About six years ago I played a part of, well it was suppose to be a 40-year old woman, and I got the role and I was thinking "I'm not 40!! How dare they!!" It took me a long time to get the character and I felt really uncomfortable and really not in my comfort zone. But actually it's been one of the best things I did because it brought me out of my comfort zone; it brought me out of myself and stretched me as a performer. That was quite a challenge.

How did you overcome it?

I got really annoyed at myself a lot, I thought "I can't do this" or "I'm not right…this is so stupid". I was 20-ish at the time of playing a 40-year old woman, and she wasn't actually dissimilar to Daniela from In The Heights. She was very sassy and very seductive, and I remember thinking "Aimie, you are either going to be terrible and people are going to review the show and think why is she playing this part? Or just go for it and see what happens." and I remember we had a press night and the reviews were incredible and I just remember thinking "Oh my gosh!" I got over it by basically just thinking what's the worst than could happened and just going forget about ego, forget about how good you think you are or about what other people are going to say about you and just do the best you can!

Actually that's the reason I got on In The Heights because it was the same producer. So from doing that job and thinking, "I'm going to be terrible and everyone's going to think I'm awful" I actually got In The Heights. It's scary sometime but I think that's what acting is really. If you make silly mistakes and if you do something a bit out there it doesn't really matter because you're the character, you decide what it does.

I would say the biggest bit of advice someone ever gave me was "Aimie, it's all about staying in the game". It is difficult, don't get me wrong, it's hard and like I said before, you get rejected a lot. Lots of people that I know my age have all dropped out of it and are doing other things now, which is fine obviously, but the best bit of advice I got was if you really, really want it, if it's a dream of yours and you really believe you can do it, you just have to keep going and staying in the game. By that I mean, people will keep saying no but you just have to keep trying and keep auditioning and keep trying to get better and going to classes. That's all it's about, because if you leave and you give up you'll never know. You'll never know if the next audition you'd have done was going to be the one that you got.

Have you got what it takes to be an actress? Check out the job profile on Creative Choices, a website dedicated to careers advice for people who want to enter the arts. 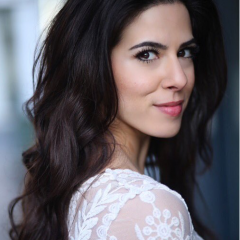 Aimie Atkinson is an award-winning actress who was in the closing cast of the West End production of Lin-Manuel Miranda's 'In The Heights'.