Voice MagInterviewsInterview with Sam B…

Ellen Orange speaks to Sam Baker, a journalist and co-founder of The Pool, and author of The Woman Who Ran, about her career in writing and her new book.

Sam Baker is a successful journalist, having been editor-in-chief of Red she is now a co-founder of The Pool online magazine and this year published her first novel, The Woman Who Ran. We spoke to Sam about her career in writing and her new book.

When did you become interested in journalism and writing?

I always wanted to be a journalist - or to be more specific, I wanted to work for Smash Hits! - but the careers teacher at school told me I was being ridiculous. "Girls like [me] couldn't be journalists." When I was in sixth-form I applied for a place at journalism college at the same time as I applied to university. I didn't get in - they said I didn't have what it took to make it in journalism. I didn't let either of those things put me off. They just made me more determined.

How did you start your career as a journalist?

I learnt to type and joined a temp agency which specialised in media companies. A few weeks after I started, the PA to the editor of that magazine just didn't come into work one week. They called for a temporary secretary - I went and didn't leave. Well, not for a long time.

Where did the idea for The Pool come from and why did you think it was important that this content was for women?

After decades editing women's magazines I could see that they were in decline and rather than looking at things a totally different way, they were too busy fighting the fires of declining circulation and reduced ad revenue. I could see there was still a hunger for not only good content, but also people you trusted to pull that content together in one place, and deliver it to you where you are (i.e. on your phone) and when you want it (e.g. morning news, lifestyle lunchtime etc.). We knew from talking to hundreds of women that they were sick of starting to watch a video and then discovering that it would take 15 mins when they only had five. So we decided to put how long it would take to consume everything. That's been incredibly popular.

Why did you turn to crime fiction?

I actually started in crime, then diverted to "women's issues" (hate that, sorry). But my heart was in crime. It's what I love and what I read. So I changed back.

Did you find the thriller genre difficult or enjoyable to write?

Both! Thrillers are no easy get out to write. Far from it. Then I gave myself the added complication of taking inspiration from one of the most important (but under-sung) novels ever written.

The Woman Who Ran is inspired by a classic Victorian novel, The Tenant of Wildfell Hall but is incredibly contemporary - did you feel these two aspects came together naturally and why was it important to write about them?

Initially I reread The Tenant because I couldn't understand why it was so much less popular than the other Bronte sisters' classic novels. I wondered if it had somehow dated terribly; there are elements that have for example Helen is incredibly pious in the original. But I was struck by how contemporary the themes were: the balance of power in relationships, coercive control, the insidious nature of gossip... while of course things have changed I wanted to explore both what had and what hadn't.

Do you think your book might spark new interest in The Tenant of Wildfell Hall?

Yes, it definitely has. Lots of people - readers and other writers - have said they either read it again or for the first time because of TWWR.

Do you have any advice for aspiring young writers?

Just do it. No-one ever wrote a book by thinking about it. It's hard work, but then everything worth doing is, in my opinion. Don't worry if you can't afford to do a writing course, lots of people haven't. There are lots of writing competitions and many agents and editors are constantly scouting for new talent on social media. I've never known a better time to be a debut novelist.

Do you have any exciting plans for the future?

So many; I just need to make time to do some of them. 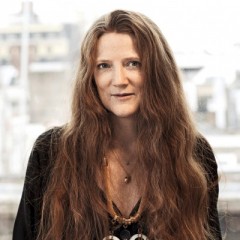 Ellen Orange speaks to Sam Baker, a journalist and co-founder of The Pool, and author of The Woman Who Ran, about her career in writing and her new book.