We speak to musical artist SlickdotR, who talks to us about his upcoming album, 'SR3'.

Can you introduce yourselves and tell us about your creative career?

I’m SlickdotR, an artist and producer who creates and expresses in the world of alternative hip hop.

How did you get into the industry?

I started my musical journey in East London with beat production during music lessons and later joined my school's steel band. These inspirational periods taught me composition, bass, rhythm, melody and harmony.

Around the same time, I was heavily influenced by the Grime scene and later by the new wave of melodic Hip Hop coming from the US. From there, I started to craft my own signature sound, which you can hear throughout my discography.

What has your experience been like in the industry so far?

It’s hard to summarise that into a short statement. Every moment living as an artist gives me a new experience, unlike the one beforehand. All I can say is that there’s been plenty of highs and lows, but I keep going because it’s what I know my purpose is.

Tell us about your latest song/album.

My latest song is a Flex track, which I produced and wrote with an amazing artist, Boy Nash. I approached it with the idea of creating a big anthemic sound, something that would demand the attention of an audience and shine a light on the current mindset we see in a lot of people who Flex online. Be sure to check it out!

Who are some of the people you’ve worked with, and how have they aided your creative process?

I’ve worked with many artists and producers over the past ten years. A couple who have significantly aided my creative process would be:

Emmavie - she produced a beat in front of me years back and instantly lit a fire in me. I [ramped] up my work rate and found the confidence to start rapping and singing over my beats.

Odysi (Novacane Studios) - he has been a huge influence on my approach to songwriting, sound selection, song arrangements and so on. We’re currently working together, so much more to come from our relationship.

Where do you get your inspiration?

My main source of inspiration comes from performing live and seeing how my music affects people in real time. It allows me to see what really works. So I absorb it all. I later take it to the studio and express myself, but only when the moment feels right.

Who are the icons you admire?

My main icons would have to be Kanye West, Kendrick Lamar, Kano & Kid Cudi.

If you could give your younger self any advice, what would it be?

I’d tell younger Slick to stay true to what makes him feel happy. Also, enjoy the journey because the destination/end goal is always moving.

I’ll be releasing a string of singles over the next few months, all leading up to the release of my forthcoming album entitled SR3, which is the third instalment of my self-produced SR series. I’m looking to hit the festival scene in a big way for 2023.

Thanks for the interview! 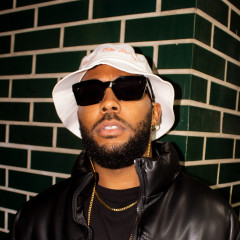 We speak to musical artist SlickdotR, who talks to us about his upcoming album, 'SR3'.