“You blink, two decades have passed, and you become the thing you always despised, a three-dimensional, functional adult with reasonable expectations.”

Emily Breeze’s new single ‘Ordinary Life’ is set to drop in a few weeks in anticipation of her upcoming album ‘Rapture’. Emily talks to us about her inspirations, the process of creating the album and paints a vivid picture of what sounds to be a great contribution to the genre of Pop Noir.

Can you introduce yourselves and tell us about your creative career?
I am a songwriter from Bristol and have played many genres of music in many different lineups over the years from country to grunge to electro. My current project goes under my name, but I play with a brilliant five-piece band. Rob Norbury (guitar), Andy Sutor (drums), Helen Stanely (keys/synth) and George Caveney (bass). I have described my upcoming album Rapture (due for release Feb 2023) as a collection of coming-of-middle-age stories which celebrate flamboyant failure, excess and acceptance. Genre-wise there are elements of everything from Doo Wop to Disco, but for brevity, we call it Pop Noir.

How did you get into the industry?
I have been skulking around the margins of the music industry for the last 15 years like a goth at a house party. However, everyone knows all the best stuff happens in the smoking area anyway.

What has your experience been like in the industry so far?
Hunter S Thompson said, “The music business is a cruel and shallow money trench, a long plastic hallway where thieves and pimps run free, and good men die like dogs. There's also a negative side.”. This is probably true, although, in the areas where I operate, there is a lot of goodwill and good people doing it for fuck all and helping each other out. The kind of industry people who might compel me to get botox or make Tik Toks aren't interested in me anyway, so we are having a lot of fun in the underground.

Tell us about your latest song?
“Ordinary Life” reflects a gloriously misspent youth and a celebration of the magic, misery, miracles and monotony sewn into the fabric of everyday existence where you are the hero of your own mythic quest. It’s a quest that involves biblical first loves and tragic one-night stands, epic all-nighters and the quiet desperation that follows as your dreams disperse like the fronds of a dandelion clock in the cold morning air. You blink, two decades have passed, and you become the thing you always despised, a three-dimensional, functional adult with reasonable expectations. It is the theme song to the end of a John Hughes movie set twenty years after prom night. Except, it’s not prom night; its Butlins and Mike Leigh is directing, but Simple Minds and Siouxsie Sioux are still sparkling in the spotlight, and so are you.

You’ve worked with some really great people putting this song together. Tell us what the process was like for you?
Keeping a five-piece band together when people have multiple projects and full-time jobs can be challenging, but I wouldn't have it any other way because they bring so much colour and life to the songs. It is a privilege to work with their level of skill and imagination, and we are all good friends, so band practices often dissolve into a frenzy of dirty jokes and weird dances. Producer Stew Jackon is the end-of-level boss of the project and adds the final layers of magic to the recordings.

Where did you get your inspiration?
After aeons of procrastination, I force myself to sit down and push ideas around until something happens. The ideas are always there; you just have to work through the discomfort of the blank page.

What’s your favourite lyric from the song?
“One day, you will find yourself at a friend's 40th birthday party wondering how the days turned into decades and if anyone still does drugs.”

Who are the icons you admire?
There are too many to mention; generally, they are characters with bold and weird ideas [and] are not afraid to be ridiculous.

If you could give your younger self any advice, what would it be?
Stop procrastinating and get on with it.

When is your single released, and where can people find it?
‘Ordinary Life’ is out on September 23 and will be available on all streaming sites.

What’s next for you?
We have a string of gigs coming up to support our single releases and then tour dates for 2023 when the full album ‘Rapture’ comes out.

Where can people find you online?
linktr.ee/emilybreeze 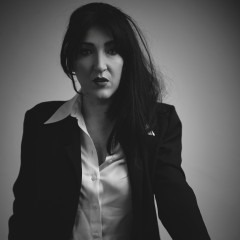 “You blink, two decades have passed, and you become the thing you always despised, a three-dimensional, functional adult with reasonable expectations.”