In the run up to Voice's latest coverage of the Edinburgh Festival Fringe, we have dozens of interviews with performers like Canadian comedian Peter White, who we'll be seeing up there.

My name is Peter White, I'm a comedian originally from Canada. "Straight White Male" is a show about race, gender, and sexuality and the place of a straight white male in the world today. It's both more liberal and more funny than it sounds.

When I was young my parents would always watch Just For Laugh's, and I was fascinated with these guys who were entertaining thousands of people with nothing but a microphone

When I was in high school in Canada I ran for class president, and got to make a speech. I had no idea what I was talking about, but I tried to be funny and it worked and I won. I then did a terrible job and everyone regretted it, but I was hooked on performing.

The first time I got paid was after I had been doing open mics for about 2 months. I got booked to do 15 minutes at a company Christmas party. It was exciting because before that I had never ruined 300 people's collective night before. I was never asked back.

Not having a boss or anyone I have to please. I get to say what I want, and no one else has any input. Also free booze.

Months in a row on the road. It makes it tough to have any sort of real life. Also the aforementioned Christmas party.

You know it's bad when the people leaving are too embarrassed for you to even make eye contact.

The goal is always to try to stand out amongst the best, and where else could you do that but here? Plus any time you can spend a month of summer in Scotland you have to jump at it. Who needs sunshine and beaches?

This will be my first time up, so I guess we'll find out. I think the biggest change is to do the same show in the same venue every day. It will be a grind, but luckily a healthy Scottish diet should help me maintain…

Don't look at what anyone else is doing professionally. Focus on you. It's not a race. Work hard, work often, and things will work out. 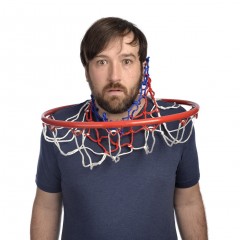 In the run up to Voice's latest coverage of the Edinburgh Festival Fringe, we have dozens of interviews with performers like Canadian comedian Peter White, who we'll be seeing up there.