"My mum would write stories and read them to my twin brother and me when we were small. I remember her making up this epic fantasy Odyssey which, as I recall it, might be one of the greatest things ever written. But according to her she lost it. A true tragedy."

Hello reader, my name is Patrick. My mates call me Pat and I think we’ve struck off on the right foot so feel free to join in. I’m a writer-performer, currently working mostly in theatre, and I’m a 25-year-old, six-foot-seven queer man who is five-eighths Australian.

Colossal is a one man play about love stories and how we tell them. Without spoiling too much, because it is tricky to explain, it follows a character called Dan as he takes you through a slick but slippery account of his recent past. First and foremost, it’s a comedy, but it also circles around some important topics. It’s a big mad messy (in a good way) mesh of original music, sketch comedy, monologue and gig theatre and I’m hoping it makes for a fast-paced and dynamic hour of theatre. I started working on it a few years ago and it’s finally a full haywire piece of something and I’m very excited to see what people make of it.

Because it’s the best arts festival in the world and every time I’ve gone I’ve met the most incredible, talented people and I’ve had the best time. That’s an exuberantly clichéd answer but I’m sticking to my guns.

I’m not really sure when I first felt motivated to enter the industry. I started writing and performing in tiny venues at uni just to put stuff on for my mates and then I guess at some point that snowballed a bit. Inspiration wise I’m a shameless Bo Burnham fanboy to an irritating extent. Other than that I’ve mostly been inspired by really funny people who I watch on repeat, such as Taylor Tomlinson, Romesh Ranganathan, Flight of the Conchords, the list is endless…

My parents are both English teachers, so I was really lucky to grow up surrounded by books and plays and poems and all that. We weren’t allowed any video games or much TV so it was all reading or writing and I think that made all the kids very creative as well as slightly odd. Otherwise my career so far owes a big debt towards the friends I made at university who helped me put shows on and wrote with me/directed me.

My mum would write stories and read them to my twin brother and me when we were small. I remember her making up this epic fantasy Odyssey which, as I recall it, might be one of the greatest things ever written. But according to her she lost it. A true tragedy.

Something more left-field. I’m sure there’s a parallel universe where I work in a hostel in Madrid, speaking Spanish, welcoming travellers, playing the lute (in this universe I also play the lute.)

Absolutely did. I was sure that I wouldn’t perform anything for a couple of years, so it felt very freeing to just write without thinking about the reality of performance or the stress of the audience, which meant I could try a lot of new things. I hope I keep that way of writing. I wouldn’t say I approach shows with a different mentality though, I’m quite neurotic about that process.

I’m not sure I have a concrete opinion on it which wouldn’t just sound like re-hashing other soundbites. But generally no.

Harold Pinter or Arthur Miller. First plays I was ever in were Pinter and Miller plays, they’re obviously geniuses, and I just think we’d all really get on, in a way which would make everyone else consider us cliquey and loud.

You only have two things in your control: the quality of your show, and how hard you work. And you don’t actually know about the first one. So don’t worry about that. Just flyer hard, make friends, be nice and commit to it all fully. That’s my most serious answer yet, isn’t it? 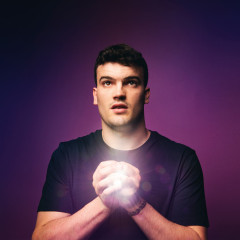 "My mum would write stories and read them to my twin brother and me when we were small. I remember her making up this epic fantasy Odyssey which, as I recall it, might be one of the greatest things ever written. But according to her she lost it. A true tragedy."