"While clocking up stage time is important and putting in your 10,000 hours definitely has its value, I now appreciate how important it is to set smart goals so you get exactly what you want out of each gig."

Hello! My name is Hannah Fairweather, and I am a stand up comedian and writer. I also claim to be an actor on my CV even though I haven’t actually acted professionally yet - but I figure that ‘acting’ is just pretending that you are something you’re not, so, to be fair to me, I am doing exactly that.

My show is called ‘Just A Normal Girl Who Enjoys Revenge’ and consists of me making my way through a list of everyone who has wronged me in the past. Think Taylor Swift if she lacked musical talent but maintained the same amount of never letting anything go. It is difficult to tell you more without giving too much away - but if one were to find my list of people who have done me wrong (kept in a little blue book I carry with me everywhere - both literally and figuratively), they might find some of the usual suspects - ex boyfriends, ex colleagues, ex flatmates, podcast hosts and, of course, some devout Christians I met while playing college golf in South Carolina.

To be clear, I don’t typically go around enacting revenge in my real life - in fact, in real life, I very rarely stand up for myself, I just write stand up. I think standing up for oneself is something that a lot of people have difficulty with - most of us think of what we actually wanted to say or should’ve said hours later in the shower. So that’s what I decided to do - take every thought I have had whilst shampooing my hair and turn it into a show.

It’s a really exciting opportunity to showcase work that I am really proud of - the Fringe is all about grass roots and getting to share your work with the people who comedy is really made for (and I don’t mind at all whether they are from TV or radio).

It’s the best festival in the world - in my humble opinion. I love everything about it - the city it takes place in, the sheer amount of audience members and comedians alike, the chance to see some of the best comedic talent, and the opportunity to hopefully be considered a part of that.

I honestly can’t remember a time when I didn’t want to do comedy - but for a long time it was something I could only see as a pipe dream. The idea of it lingered in the back of my mind, even while pursuing different careers. I didn’t think it was realistic to pursue, but I finally decided to try my first open mic after leaving a terrible job and thinking that it might be worth a taking a chance at my dream job after all - so in that way, I would say my old boss was my biggest inspiration. So cheers, Steve!

I was born in Scotland to a Scottish father and a Kiwi mother but I grew up all around the world making me what is referred to as a ‘Third Culture Kid’. Such an upbringing made me quite reserved and shy, I was always the weird new kid with a different accent to all my peers - my family moved so often that my accent was always somewhere between the new place and the old place and I just could never quite get the accent right (think Emma Watson). This resulted in mild teasing which resulted in massive alterations to my character - I became a very shy and quiet kid. I think the best way to describe who I was when I was younger was neurotic and pessimistic - not only was the glass half empty but it needed to be on a coaster. School reports always described me as “quiet and polite” and encouraged me to “come out of my shell” - so I guess one could argue I have overcorrected slightly, but I think this personality and the background that created it has had a big impact on my humour - I’ve always been more of an observer than the centre of attention in social settings and I think that’s where most of my comedy comes from.

When I was in primary school, I made my debut as an “artist” - performing the coveted (non speaking) role of the Leaning Tower of Pisa in my school play. My job was to simply lean, in the background, in the corner of the stage, beside the Eiffel Tower and the Statue of Liberty (inaccuracies in geography that bothered me throughout the run) for the duration of the play, but I repeatedly pretended to fall over (much to my teacher/directors dismay), resulting my first ever laughs from an audience - a high I have been chasing ever since.

So far, I have dabbled in exclusively male-dominated industries - I grew up playing golf, I went on to study engineering at university, I became an accountant, and now I am a comedian. The only thing that ties my haphazard CV together is my unwavering desire to steal jobs that God intended for straight white men. So, when my career in comedy inevitably runs its course, I guess politics is next? Heard there are some openings.

A lot of people moved their work online during the pandemic, increasing their social media presence and creating sketches and viral content. However, the pandemic helped me realise that I am, first and foremost, a writer - so I took a different approach and decided to focus on long term goals of writing a sitcom and a book.

Now that things have reopened, I also approach shows with a different mentality. I used to gig as much as possible, but after being forced to take a break, I started to reevaluate how efficient and effective the way I was working really was. While clocking up stage time is important and putting in your 10,000 hours definitely has its value, I now appreciate how important it is to set smart goals so you get exactly what you want out of each gig. Whether it is trying out some new jokes or trying to refine my delivery of an existing bit of material, I now like to make sure I hone in on specifics of what I am really trying to achieve each time I am on stage.

Working endlessly on this show.

There’s a lot to unpack in this question - but if we are to humour ourselves and pretend that comedy is “art”, and that “artists” (especially successful and famous ones) truly face real world consequences of “cancel culture” - then I would say no, I do not believe “art” should exempt anyone from anything.

I especially do not think “artists” should be exempt from consequences if their “art” is used as a vehicle to spread misinformation and hate, which is unfortunately something we see all too often from “artists” with hugely profitable platforms, significant financial backing, huge followings and industry support - all while they claim that they have somehow been overlooked, silenced or “cancelled”.

If I had a penny for every time I have heard a podcaster or comic say something intentionally inflammatory and contrarian but immediately follow it with “this will never make the edit”, I would have as much money as they have earned from saying things that they always knew would absolutely make the edit.

Taylor Swift. I love everything Taylor Swift has ever done (except for CATS but we all make mistakes). I think Swift is a phenomenal writer and a great deal of what she does in her music has parallels with what I am trying to achieve in my comedy - I genuinely think she is the best comedy writer SNL has ever hired and I think the way she brings up things that happened a decade ago that she was right about is a great bit. I am such a fan that she has become a big inspiration for my own work - I like to (rather obnoxiously) refer to myself as the Taylor Swift of comedy, because, like Swift, my work is personal, of the narrative storytelling genre, and often about people who have wronged me in the past. I’d like to work with her and meet her, if only to give myself the chance to apologise for the obsessiveness and insist that a restraining order is not necessary.

Remember why you are there and keep your head down - it’s such a fun festival but it’s easy to get wrapped up in all that it has to offer and tire yourself out, so remember you’ve got a job to do and you want to do it as best you can. My priority will be making my show the best it can be everyday and since I am incredibly sensitive (both emotionally and in terms of my terribly weak immune system,) I will be drinking my herbal tea, getting plenty of sleep and minding my business throughout the month. 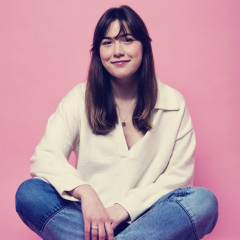 "While clocking up stage time is important and putting in your 10,000 hours definitely has its value, I now appreciate how important it is to set smart goals so you get exactly what you want out of each gig."