We speak to comedy music act Flo & Joan, consisting of sisters Rosie and Nicola, all about their show 'Sweet Release' heading to Edinburgh Fringe

We are Flo & Joan, and when we’re not working as a musical comedy duo, we’re in separate houses watching Better Things and eating crisps.

It’s an hour of musical comedy and stand-up covering all the big topics of the day: over-thinking, alien boyfriends, and the plethora of weird shit your mum keeps in her house and won’t get rid of.

We’ve heard it’s incredibly lucrative and the place where all your dreams come true. Like Disneyland for damaged people.

It’s more chaotic because it’s massive and long and feels like every person in the world is there. Which is great, because it can be really social and fun, but also not great because you can guarantee the person you’ll run into the most over the month is the person you want to see least. It’s also just a Pizza Hut buffet of some of the best entertainment in the world.

Nicola: My friends found me funny, and musicians thought me confusing and lazy. I was obsessed with 30 Rock when it came out and thought, ‘Huh, that woman has brown hair and glasses and is funny in a way that I think I might be. I’m going to try being a comedy writer’. I sent off a packet of jokes to the BBC Radio 4 show ‘Newsjack’, the first one at the top of the page was picked for the show, thus confirming to me at that moment that I might not be shit at writing. Then I sent in jokes every week for three series and never got another one on ever again… Nevertheless, she persisted, and here we are.

Rosie: I saw comedians getting paid for being funny and thought, ‘I wonder if we could do that too’.

Our inspirations were Wood and Walters, Spike Milligan, Smack the Pony, the Simpsons, and the Amanda Show. Then we became angsty teenagers and found Eddie Izzard, Tim Minchin and Billy Connolly. Then YouTube introduced us to the Tina Fey’s and Amy Poehler’s and Kristen Wiig’s. But our aim wasn’t to follow their careers and have the same trajectory as any of them. We just kind of went with what went, and here we are.

We were brought up by our mum, who loves music and played loads of music in the house and the car, which laid the foundations for us there. And both of our schools happened to also be really into music, so we spent most of our childhoods in choirs and big bands and various ensembles, which could maybe explain why we like collaborating and performing with another person on stage as opposed to as a solo act? I think that also made us not competitive, which sounds like it wouldn’t be helpful in comedy, but we prefer it. Like, you’re never the most important person in a wind band, you’re all equally lame.

Not sure where the comedy came into play really. Probably some trauma from a family incident we’ve forgotten/never been told about.

Rosie: Running around the living room with no clothes on and my pants on my head to mum’s Celine Dion album and thinking, ‘this is art’.

Nicola: Going to see the local amateur dramatic company do the Sound of Music when I was 3. That was also art.

Rosie: Lounging on a beach in Sardinia being fanned by monkeys who feed me crepes and compliments all day. Or selling my clothes on Depop.

Nicola: Sitting in the pit band of a West End show wondering how many times I can play ‘Defying Gravity’ before I want to cut my own fingers off.

It did and we do. We didn’t do loads of work over the pandemic, we took a break instead, which was very healthy and invaluable for us. When we started gigging again we enjoyed the shows a lot more. How insane to enjoy your job! Then we wrote new material with no pressure on ourselves, and now we have a show that we love and where the thought of playing it every day doesn’t fill us with sick. Good times.

Cancel culture is immature, but you shouldn’t be able to say any idiotic thing you want, free of criticism or repercussions, because you’re calling it “art”. Grow up.

Stephen Sondheim and/or Willy Wonka, potentially in the same project but we’re not fussed either way. The chocolate factory could have done with some more fun music as you walked around it. Not extra songs, the Oompa Loompa’s have that covered, but like atmospheric stuff, as you explore around and watch children get sucked into pipes. Willy Wonka is real.

Do it because you want to, and not because someone told you you have to. And have a good poster. In our first year, we were on Free Fringe, had never performed in the UK before and didn’t know anyone. Lots of people literally told us they came because our poster didn’t look like it was made on Microsoft Paint in 1993.

We’re at the Assembly Roxy, every day (except 16th) at 8.10pm, then we’re resuming our tour around the country until the end of November.

We’re on all the socials @floandjoan, and tickets to our shows can be found at floandjoan.com.

Flo & Joan bring their show, Sweet Release, to the Assembly Roxy, Central as part of the Edinburgh Festival Fringe from 3rd – 28th August (excl 16th) at 8.10pm, then on tour. More info and tickets available at floandjoan.com 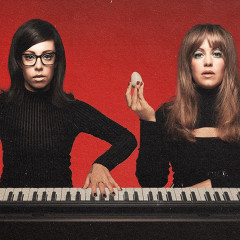 We speak to comedy music act Flo & Joan, consisting of sisters Rosie and Nicola, all about their show 'Sweet Release' heading to Edinburgh Fringe