Voice MagInterviewsInterview with Rob A…

My name is Rob Auton, I am a writer and a performer of some of what I write and I am currently writing the answers to these questions on a train back to London from Exeter.

It is a show about crowds called ‘The Crowd Show.’ I would describe it as an hour of words in a Yorkshire accent, some of the words seem to be making people laugh and some of the words don’t. People seem to be doing what I want them to do in the right places at the moment. The show is my ninth show on a specific theme. I always try to pick a subject I want to mine for humour and just to go off on one about it. I really enjoy doing it. This year I’ve been thinking about crowds but I started writing the show in 2019 and doing work-in-progress gigs in 2020 but then something happened and it became highly illegal to do a show about crowds in front of a crowd. The last few years have really brought the importance of people to the front of my brain. The show is about crowd behaviour, community, connection and there’s a bit in there about Torquay.

Edinburgh is the place where I have learnt the most about performing in the shortest amount of time. Doing a show every day for a month is like doing a period of intensive driving lessons. By the end, you are the only one who knows whether you passed or not and there is no exam.

The city of Edinburgh itself. To get to be in such a great city for a month is a treat. I think because the festival has been going for so long it’s taken on a life and it’s very experienced and doesn’t suffer fools. The streets of Edinburgh have seen everyone trying to be clever for years, they’re pretty unforgiving and really make people find themselves out. If you’re up there for the wrong reasons it will chew you up and spit you back to where you came from quite quickly. The festival feels like a wise old person who just wants you to be yourself and not try to impress anyone.

I was working in advertising as a creative. Trying to get weird ideas onto TV but it was a real struggle. I started filling up notebooks of rage and surreal stuff, some of it I liked enough to want to share. I basically was motivated to see if people liked my ideas as I did. One day my creative director said he was having a fireworks party and there would be some poetry. I said I’d been writing some stuff down and wondered if I could read it out. I stood up on his wall and it went OK, not brilliant but well enough to join a poetry collective. I started going to open mic poetry, people then would come up after and ask if I wanted to do their alternative comedy night. Then in 2009, someone asked me if I wanted to be in a four-hander show called The Big Comedy Breakfast at 11.30am up in Edinburgh and went from there really.

I was brought up in Yorkshire so that means I’ve got a Yorkshire accent. I was brought up to always work hard and try my best, my parents encouraged me to do what I want so I guess that had a pretty big impact. My education made me realise I like art and ideas. Without going to university and having to do presentations at the end of each term I don’t think I’d have got the bug for trying to make presentations funny. That’s basically what I’m doing now, a presentation of my ideas and trying to get people to have a not boring time.

What is your earliest childhood art memory

Probably a picture of a Tawny owl my parents have in their house. It’s standing over its nest with three eggs in it. The way it’s positioned I always used to think it had a big white Disney cartoon Type foot. It was only when I got a bit older that I realised its claws were in front of the eggs.  I think that’s it, good question though.

Probably working to try to get to a stage where this was my current job.

I guess I’m aware that people are still moving back out into the world and are at different levels of how comfortable they are with being at events again. It’s important to be sensitive to people's anxieties in shows I think. Some people definitely have more on their minds than pre-pandemic. It is getting back though and I’m confident we will get there. When I first got back to doing gigs it was impossible not to approach it with a different mentality because I’d lost pretty much all momentum and confidence I’d built up. My mentality was “I need to get the performance muscles back after 18 months of minimal gigs.” Covid meant that I was creating work solely for a podcast audience for a year. After doing a lot of gigs over the past year I’m really chuffed and lucky to be feeling back to where I was pre-pandemic and looking forward to getting back up there.

Marriage, commitment to the cause.

That is not an idea I am currently subscribed to. The problem with that is that people can say anything is art. As Damien Hirst says “put it in a gallery and it’s art.” Say if you’re bullying someone and calling it art, that’s not exempt from someone saying “stop doing that”.  ‘Cancel culture’, for me, is if a player in football does a really bad tackle they get sent off. Has that player been cancelled by the referee? I guess it’s because there are no rules with art. I think if you are deliberately targeting a group of people with your art and creating hostile dangerous environments then that person should be restrained from their paintbrushes or microphone. Certain things just aren’t art. Comedy-wise, I don’t know why anyone would want to make someone feel upset by ridiculing them on a mass scale.

Make sure you like the work you are going to share with people and have tested it a few times to see if you still like it after the reaction it has received. Do your work at gigs before going up there. Be nice to flyerers.  Go up there to find out who you are as a performer and to try to improve. I'm not an expert but that’s what I try to do and I have enjoyed my times up there. If you go up there and focus on the show and the people in the room then the pressure can subside a bit.

Rob Auton brings his show, The Crowd Show, to the Assembly George Square, The Blue Room as part of the Edinburgh Festival Fringe from 3rd – 29th August (excl 16th) at 2.50pm, then on tour. More info and tickets available at robauton.co.uk 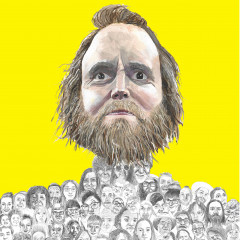