"There are no spoken words in the show and we deliberately don’t present political ideas during the show. We want something that is fun and refreshing and in some ways an escape from this world that seems so politically divided."

We are Yann Coste and Sébastien Rambaud, and we’re the two French drummers from Fills Monkey, creators and performers of "We Will Drum You"

It’s an original show based on two universal languages: music and humour.

It’s just the two of us on stage, and with no spoken words we drive the audience to a place they’ve probably never been before: A place where every human is welcome, from 3 to 100 years old, every culture, every nationality! It’s a musical percussive rollercoaster of dynamic, fun and comic story telling.

We already played the Edinburgh Fringe a few years ago and it was such an experience!

Since then, we’ve created a brand new show and we’re more experienced. We’re really excited to come back to the biggest festival in the world!

I would say of course the size but we’ve participated in a bunch of festivals around the world so we can say the atmosphere of this one’s really unique! There’s a kind of magic in the air which is really difficult to describe, and this year it’s the 75th birthday of the festival so we couldn’t miss that!

We were both attracted to this way of life, creating, travelling, meeting different people and cultures. In many ways music is a pretext to do that, but it could have been painting or sculpting! But music won at this time, (probably because I’m a very bad painter! Haha). We of course had a lot of inspiration; drummers like Dave Grohl (Nirvana) and Stewart Copeland (The Police) for example! They were really big drumming idols for us when we were young.

Yann and I have almost the same story even though we didn’t know each other at this time!

Because we weren’t happy with the "conventional" school education, we looked for something different. So when we were teenagers, music was not only a passion but I would say the way out. For that reason, we both studied music very seriously and tried to have the broadest knowledge and technique as well.

Haha it’s really not glorious, but the oldest memory I have is with my father’s drum kit. One day I snuck in to play it, and pierced a hole in his snare drum, with one of his drumsticks! And because I didn’t want him to see it, I just put a little piece of white paper in front of the hole! Obviously, he found it, but instead of being angry with me, he kept the snare as a trophy and now is the biggest fan of Fills Monkey!

I don’t think Yann and I would be able to do anything other than music. But we can play different instruments, compose and sing so we would probably be on stage anyway!

I would say Covid 19 changed almost everything in a musician’s job, but the artistic part itself. Of course, we had to cancel our world tour (we were supposed to go back to China for 30 shows!) And it’s harder now to restart the machine. But fortunately, we’re still very free with the artist and creative side. So, the magical world we’ve created on stage is 100% covid free!

It’s actually a very interesting debate but I don’t think this question really applies to Fills Monkey.First of all, there are no spoken words in the show and we deliberately don’t present political ideas during the show. We want something that is fun and refreshing and in some ways an escape from this world that seems so politically divided.

We would work with the two drummers I quoted before, Dave Grohl and Stewart Copeland! One of our dreams would be to work with them as a duo, like us and organise a drum battle with them!

I don’t know if I’m in the best position to give advice on this point but I would say work as hard as you can before, and then when you’re there relax and enjoy the festival!

Fills Monkey: We Will Drum You, Pleasance Courtyard (Grand), 4pm, 3-29 August (not 16 or 23). For tickets, visit: https://www.pleasance.co.uk/event/fills-monkey-we-will-drum-you#overview 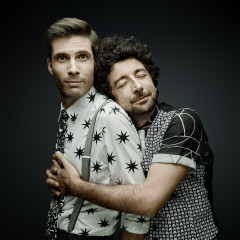 "There are no spoken words in the show and we deliberately don’t present political ideas during the show. We want something that is fun and refreshing and in some ways an escape from this world that seems so politically divided."