"My family are Scottish and so I have a huge affinity with the country, and with Edinburgh. I love the way Edinburgh hosts the fringe, it’s like nothing else in the world."

My show is called A SHOW ABOUT MEn. The title says a lot. It’s about my lifelong obsessions; me and men. It’s about how I’ve realised that I was too obsessed with men, and why this can be problematic. I’d say it’s up there with the best thing I’ve ever written.

Because it’s fun, it's a great experience, and I can flirt with other comedians.

Well it’s like the entire city is a festival. My family are Scottish and so I have a huge affinity with the country, and with Edinburgh. I love the way Edinburgh hosts the fringe, it’s like nothing else in the world.

I’ve always been hilarious. It would be a waste not to make the most of that. My inspirations were endless but I love Tracey Beaker a lot.

Well I grew up in politics, but went to a state school. I grew up around a lot of politicians but my school wasn’t one which had that same hierarchy so I don’t think I was that aware of the power structures of the world my parents were working in.

In terms of my creativity it’s given me a lot of material to play with. I also don’t take much too seriously so that’s helped a lot with my comedy.

Being told by my art teacher that I was so bad at art she wouldn’t teach me if I took it for GCSE.

I’d be on OnlyFans.

No it’s just made me a bit more energetic. From such a long time inside I’ve got so much more I want to do.

Erm not really. I think that people who spew hate and incite violence of any kind shouldn’t be exempt from cancel culture.

Don’t think that the fringe is the be all and end all of comedy, because I know financially it can be a drain. But if you’re going to do it – try not to get too wrapped up in reviews and awards etc. Enjoy it, use it to become the best comic you can be. Make friends with other comics that you will spend the rest of your career picking up while they simultaneously do the same for you!

Every day in August at the Gilded Balloon Teviot, Nightclub, at 7pm.

See Grace Campbell: A Show About Me(n) at the Gilded Balloon during the Edinburgh Festival Fringe from 3-29 August. For more information and tickets visit www.edfringe.com or www.gildedballoon.co.uk 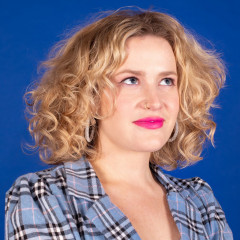 "My family are Scottish and so I have a huge affinity with the country, and with Edinburgh. I love the way Edinburgh hosts the fringe, it’s like nothing else in the world."