"Start by having an idea that captures your interest and won’t let it go, then turn it into a show you’re excited by and proud of. If you can do that, then maybe the Fringe would be a great place to take it."

Hello, reader! My name is Joz Norris, and I’m a sort of comedian but also sort of just a guy that does stupid stuff. Sometimes I write, sometimes I act, sometimes I make silly things like shows or films or radio programmes. What do you do? Tell me about yourself. This whole Q&A is gonna be me talking about myself, so this feels like my only opportunity to hear about you. Where did you grow up? Oh yeah? Uh-huh? That’s so cool! You’re really cool, don’t let anyone tell you different.

It would depend on what level of the show people wanted me to describe. On one level, it’s a piece of absurdist theatre exploring consciousness, ego, control and connection through a kaleidoscopic array of nonsense enabled by a theatrical R&D process funded by Arts Council England and devised by an incredible team consisting of myself, Ben Target, Miranda Holms, Alex Hardy, Robert Wells and Grace Gibson. On another it’s the greatest magic show of all time performed by me, the world’s most powerful wizard, in which I will take control of the audience’s thoughts, dreams and wishes in order to install myself as their new Emperor, no matter how many chickens I have to wade through in order to to get it.

The Edinburgh Fringe is in a weird state of flux at the moment. Historically, it has offered me forms of community and creativity and play that nowhere else in the world offered me. It helped me work out who I was and what I cared about and what I wanted to do and say. These days, it’s becoming so expensive and inaccessible that I don’t know if it will continue to play that role for me. I think everyone’s waking up to this, and perhaps we’ll see it go through some changes as a result. Perhaps not. I’m going this year because I missed it over the last two years and I had a show that I’m very proud of that I know is the kind of show the Fringe offers a unique platform to.

The raggedyness of it, the open-access element of it, means that, as I said, for a long time it was a playground for people to come and make work and share in playfulness and creativity and build stuff together and learn. I think other festivals that are more curated don’t offer that same “anything-goes” vibe, which is a truly electric thing to be part of. You can come up with the stupidest idea in the world and there’ll probably be an audience for it at the Fringe. Mind you, it is becoming less accessible, and as a result is becoming less and less the definitive word in that type of creativity. It’ll be interesting to see how it morphs in the next few years in response to the challenges it’s facing.

I grew up adoring sitcom. It was never stand-up that inspired me, really, it was Peep Show and The Mighty Boosh and Garth Marenghi and Alan Partridge. It was comedy that built worlds and told stories in them. That was always what I wanted to do, I never necessarily wanted to get up onstage and be “the funny guy.” But the stage is the easiest place to be able to put your work and start to build those worlds and tell those stories, so I found my way into live comedy that way.

My parents were both in the arts – my dad is a pianist and my mum is a singer and maker – and I think that mattered a huge deal. What I’ve ended up doing is a million miles away from the type of thing they do, and they never once pushed me towards any specific type of artistic career, but they also never pushed me towards anything other than the things I was authentically curious and passionate about, which for a long time was just that I wanted to be Terry Pratchett. It’s amazing how much that kind of support matters. For so many people, the sheer idea of trying to buck the trend of pursuing a stable career, and instead pursuing a creative dream, is one full of anxiety and fear, and that was never the case for me, and I’m so grateful to them for that, and try to always be aware of what a privileged position it is to not have that learned self-doubt. I knew from them that it was possible to have a creative career and that I had permission to try and have one myself, and that gave me a lot.

I drew a picture of Captain Haddock in reception, but I thought he wore a jacket with an anchor in the centre of it, bisected by the lapels so each breast of the jacket had half an anchor on it. Saw a picture of him a few days later and remembered that he wears a single, un-bisected blue jumper with an anchor in the centre and felt genuinely embarrassed by my bad, inaccurate artistic attempt.

I used to be the deputy head of a higher education college for French students studying advertising, so maybe I’d still be there. Or maybe I’d still be the admin assistant in that children’s OCD clinic, or maybe I’d still be doing magic for babies in that magic baby cafe. I took a lot of jobs over the years, but I don’t know if any of them captured my interest enough to be a decent replacement for the thing I love doing. If I was ever to retrain entirely it would be in clinical psychology, I think. I wouldn’t mind going into counselling or something. It’s valuable, meaningful work.

I work harder now. I realised how much I miss it when I’m not able to make shows, and how much I missed being able to collaborate with other people. So now I try to find ways to put maximum effort in, and to invite people I admire into the creative process with me so we can share in it. I look at show-making less like an elaborate self-indulgence and more like a privilege. I try to think of it like “Wow, we actually get to make a show that other people can come and watch and enjoy. Isn’t that an honour? What can we do to give them the best possible experience we can give them?”

It’s been a funny one.

People should be allowed to explore the creative ideas they are naturally interested in. They should try to do that responsibly, taking care to try and make sure that the way in which they express these ideas doesn’t cause or invite harm to others. If their work ends up causing harm, inadvertently or otherwise, then those who were harmed by it are entitled to reply. The artist can then reflect on the harm they did and offer a reasoned response by engaging their empathy and genuinely listening to what the people they harmed say. Those who were harmed by it can then listen to what the artist says and engage their empathy and the two can have a conversation and maybe even come to an understanding. If people practise empathy then there really is no need for this question, or the phrase “cancel culture,” to exist. Every time it’s parroted it can become an invitation for people to continue shutting down their empathy. It has to stop.

Vonnegut. Would bloody love to work with Vonnegut. He showed me how to do this.

Don’t start by deciding you want to go to the Fringe, then try to come up with a show. Start by having an idea that captures your interest and won’t let it go, then turn it into a show you’re excited by and proud of. If you can do that, then maybe the Fringe would be a great place to take it. But let the idea direct your plans of where to go with it, don’t set yourself a destination then try to have an idea that suits that destination.

Joz Norris: Blink is performing at Pleasance Dome at 8:20pm from 3-29th August. For tickets and more information visit edfringe.com. 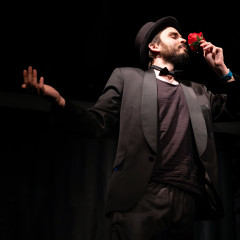 Interview with Joz Norris: "A guy that does stupid stuff"

"Start by having an idea that captures your interest and won’t let it go, then turn it into a show you’re excited by and proud of. If you can do that, then maybe the Fringe would be a great place to take it."