Voice MagInterviewsInterview with the m…

TikTok sensations Tabby and Chloe talk about their upbringing, the appeal of the fringe, and the importance of prioritising mental health.

Hi! We are Tabby and Chloe, aka the Sugarcoated Sisters - musical comedy duo, TikTokers and real-life siblings from Hertfordshire.

Sugarcoated Sisters: Bittersweet is our debut show! It’s racy, raw, raucous and very rude. It’s the true tale of two sisters who move back to their home town to discover unfinished business lurking around every corner. Armed with original songs, a guitar and double bass, no musical style is off-limits as ammunition for their scathing revenge on everyone who’s ever wronged them! The show is directed by Laura Corcoran (Frisky & Mannish), which added a whole extra dimension to it!

We took a few musicals up to the Fringe in our teens and had a blast! But that was over a decade ago, and we feel like now is the time to return with our brand new act.

Well, it’s the largest arts festival in the world, and when we’ve been there in the past, we felt like we were right where the innovation happens.

And this year, they’ve partnered with TikTok, which opens up a whole host of incredible opportunities for performers!

Our motivation actually came from starting a TikTok channel. We had both just been dumped and were really struggling, so we downloaded the app to take part in some silly weightlifting challenges to see how many ways Tabby could lift Chloe. Unfortunately, there were only about 4 moves we could pull off, so we started posting musical parodies about our heartbreak instead! When we were kids, our favourite game to play was Patsy and Eddie, where we would totter about pretending to be in Absolutely Fabulous for hours on end. Jennifer Saunders, Joanna Lumley and Dawn French are huge inspirations to us.

Chloe: We were extremely fortunate to have had an upbringing that encouraged creativity from a young age. Our Dad’s job moved us around quite a lot, and we spent two years growing up in both New York and Paris. Having an early education in America, France, and the UK was very interesting, as the whole vibe was completely different. This encouraged us to adopt a variety of communication styles and find multiple ways to express ourselves.

Our Mum played flute in a salsa band when we were young, and she taught it for many years. Our Dad is tone-dead, but that doesn’t stop him from plucking Christmas carols on the guitar every so often! We didn’t have a TV growing up, so we often used our imaginations to create complex improvisation games that would last for hours and put on made-up musicals for our parents! We have two other siblings who are also musical: our youngest sister is a wonderful jazz singer, and our brother plays electric bass in a band. We are also extremely grateful to our grandparents, who have been super supportive of our artistic career throughout our life. All of this being said, our upbringing wasn’t always easy.

I have bipolar type 2, and when I was about nine, I became quite existential and pretty anxious about some kind of natural disaster, like a wildfire, hurricane or tidal wave occurring. Hints of depression and hypomania crept in during my teenage years. Unfortunately, despite exhibiting symptoms of bipolar, I was not diagnosed until I was 26. Perhaps if I had been diagnosed sooner and been offered the right mood stabilising medications, I could have avoided some of the anguish I endured. Despite bipolar being painful to live with in my later teen years, it fuelled me in a positive way sometimes. When I was hypomanic, I could perceive connections I wouldn’t usually put together and have the energy to transform them into creativity. And when I was depressed, I spent a lot of time exploring the deep despair I was experiencing in an attempt to heal. I believe that feeling these intense emotions at such a young age shaped my creative process. And so, I wrote literally hundreds of songs drawn from both energetic states.

Tabby: When we lived in France, we went to a French drama class after school. We had to do an exercise where we stood on chairs and screamed at the wall. I absolutely adored it, but Chloe hated it and sat crying in a crumpled ball on the floor. But then, when we were back in England, Chloe started guitar lessons and fell in love with it, whereas I tried to learn but kept getting told off for staring out of the window at our little brother and sister on the trampoline.

Chloe: Probably digital marketing, as that is the field I accidentally fell into after graduating from Berklee College of Music, and I quite enjoyed it.

Tabby: Teaching yoga and dance! I trained as a yoga teacher in 2017 and taught yoga and dance full-time before the pandemic hit! During lockdown, I completed additional training in Yin yoga and was looking to do a course in teaching yoga for diabetes.

We’ve dropped everything to focus on musical comedy now, so we’ll let you know how that goes!

Covid-19 changed everything for us, as it gave us a new career option that we would’ve never considered! Chloe had lived in Brighton for about five years, and Tabby moved to Brighton for a new yoga job three weeks before the first UK lockdown. In October 2020, we moved in together, downloaded TikTok and never looked back! We’ve only just entered the live scene, so we’re interested to see if our mentality towards shows has changed.

In an interview with The Wrap, Jameela Jamil noted on the rise of cancel culture that it is “vital that people separate ignorance from evil” and that “if someone shows that they’re receptive, if someone is willing to be fully apologetic and then make effort to not just say the right thing, but to do the right thing” then in certain instances, they can be forgiven. We agree. We also feel that if the person does not admit wrongdoing, take responsibility, and instead defends their problematic stance, they sometimes deserve to face the consequences of their actions.

Art as a whole is often an extension of yourself and therefore should not be exempt from examination. As for comedy, a good friend of ours often relies upon the idea of not ‘mocking down’. As in, don’t take the piss out of groups that are equally or more marginalised than you are. As for groups that are far more privileged than you, go for it! There are so many things you can joke about in the world that if you have to rely on harming marginalised groups, you’re probably quite limited in your own ability to create art.

Tabby: Jack Black because people always say I remind them of him! I feel we’d get on and really rock out.

Chloe: AURORA, as I love her music, especially the harmonies in “Everything Matters”.

What advice would you give to someone who wants to take a show up to the Fringe?

We’d say to prioritise your mental and physical health above all else. For other aspects, we’ll get back to you with what we learn during our Edinburgh Fringe debut!

Sugarcoated Sisters make their debut with their show ‘Bittersweet’ at the Just The Tonic Caves – Fancy Room at 8.50pm from 4th – 28th August. For tickets go to www.edfringe.com 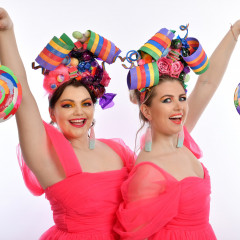 TikTok sensations Tabby and Chloe talk about their upbringing, the appeal of the fringe, and the importance of prioritising mental health.