Esther Burns (Estie B) is a British artist, who created a film for ROH Bridge, about the status of art in UK schools and wider life.

When did you start work as an artist?

I'd say that I felt I'd 'officially' started work as an artist when I made the video, earlier this year. It was the first piece that I'd been commissioned to make that wasn't for friends and family and that centred on an idea that I was already exploring within my practice.

Did you know that was always what you wanted to be?

As a kid I had a new career plan every week; hairdresser, garden designer, barrister etc. But it was by the time I got to my a-levels that I had to toss up between pursuing acting or art. I decided that I wanted to be creative and 'act' out my own ideas and narratives through being an artist rather than an actress.

Did you take a traditional route into art - via art college?

I did take the traditional route of completing a year-long foundation course and then doing my art degree. However, I should mention that I had a big wobble on my foundation (which I wasn't really enjoying), where I questioned whether I wanted to continue on the challenging path of pursuing art or if I should skip uni and get stuck into a job where I was guaranteed plenty of work and a clear career path. In the end I decided that I needed more time to think about why I was interested in art so strongly and felt that I had ideas and a view that I needed to get out and create things from, so I applied for a degree.

What inspired the video that you created for ROH Bridge?

My video for the ROH Bridge was inspired by a survey that had been carried out by young representatives for the Bridge in the counties surrounding London, that asked other young people what their motivations were for taking part in arts and culture, and the barriers they felt that prevented their involvement in this area. In my video I tried to address the barriers that had been described in the survey and to convey my take on these. I could really relate to these feelings and thinking more about them led me to question why art and sport were treated so differently in eduction and the world at large. I tried to imagine if art were treated as sport. The imaginings of these scenarios were quite funny: the idea of people gathering in the pub to watch the Turner Prize award ceremony. In my work I often try to convey serious ideas and subjects in a tongue-in-cheek way, because I think humour is a great tool for provoking serious thought about the topic, rather than being preached at or made to feel guilty. Additionally I used my 'Estie.B' persona and created the TV interview style of the piece just because I often find myself thinking about how I'd look back at my life now and previously, when I do eventually become a famous and sought after artist.

Could your education have been different in any way, to have been more creative?

I think that changing the way art is taught in schools could make it a lot more creative. I feel like I was taught primarily to copy artists, make work in the style of them, choose a theme from a small list and to make things look as real and life-like at all costs. Personally I feel like if I'd have been taught about conceptual art and the fact that you can do things other than draw and paint within art making, I would have had more confidence in my work at that time, and could have experimented a bit more, which is what art is all about. I appreciate that art is a very difficult subject to mark, because really there's no wrong and right: it's an individual's interpretation. However, in higher education video art is marked alongside sculpture and performance, and while recognition of art history is a box to tick, it should be much more about process and exploration rather than the outcome. I feel like the school syllabus needs to be much freer, to allow more creativity.

Why do you think so many schools favour academic subjects over the arts?

I think that schools possibly favour academic subjects because I think the career prospect of being an artist, for example, is seen as being extinct. Perhaps because of the economic climate, schools see the arts as an insecure industry to try to go into, and therefore feel it is wise to encourage students into more 'sustainable' subjects. But studying the arts is a lot more than simply being good with your hands; it opens the mind to new ideas, social issues, history, politics and encourages people to follow their own way of thinking.

In an ideal world, how would art be taught in schools?

I'd like art to be taught in conjunction with other subjects, so students can see that art is related to everything, rather than being an isolated skill-set that you simply do or don't have. As I suggested in my video; I'd like to see more interaction between schools through art competitions and festivals and generally I think it'd be great if like 'football practice', kids had weekly art crits where they could bring in something they'd been working on at home and talk about it. I think this would really help to relax young people and provide some escape from the pressure of targets and results.

Esther is giving away 6 peep boards of famous artists (Warhol, Emin, Dali and more), perfect for getting creative in the classroom! If you're interested in getting some free art, get in touch with Esther, and check out the peep boards here http://estieb.com/2014/05/27/i-could-do-that-acryl...

Want to know more about being an artist? Check out Creative Choices, the arts careers website, and the profile here 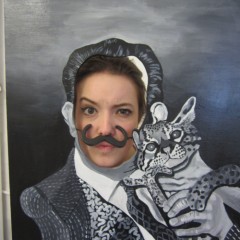 Esther Burns (Estie B) is a British artist, who created a film for ROH Bridge, about the status of art in UK schools and wider life.