Artistic Director of Action to the Word talks to Voice about the theatre company, the shows she took up to Edinburgh last year, and her future plans

1. Hi, could you introduce yourself and tell us a bit about the company?

I created Action To The Word Theatre Company in 2008 to bring classics to life. The company has a London base and after establishing its reputation on the London Fringe, we have made our name through the Festival circuit, subsequently in the West End and on tour internationally. Most recently the company has played my own adaptation SteamPunk musical of DRACULA at Latitude and Edinburgh Festivals and a Virginia Woolf play I wrote in commission with The London Conchord Ensemble entitled RHYTHM OF SILENCE, which played Rathfinny, Charleston and Bath Festival. In rep we are internationally touring our award-winning all-male version of A CLOCKWORK ORANGE and we're currently in production for our forthcoming Shakespearean Revue IN LOVE/OUT OF LOVE at The Arts Theatre London.

2. You're known for your productions of literary classics – how faithful do you stay to the text? Is this important to you?

I studied English at Cambridge University and have a life-long obsession with literature. With A CLOCKWORK ORANGE I stayed intensely legitimate to the text (with the exception of some of the male actors playing women). I was incredibly conscious of the power of the novel and the overwhelming legacy the Kubrick film has left. I wanted to create a truthful rendition of Burgess' immaculate novella. With DRACULA I went in there deliberately to shake things up. I was very flattered that the FT recently referred to Dracula as loyal to the text, as I put twists and turns in all over the place to spice up the original Stoker. The essence and themes of the book are all there though after years of fascination with The Gothic Genre. With Shakespeare all I care about is absolutely communicating the text to the audience.

3. From A Clockwork Orange to Dracula: what made you pick these stories to put on stage?

I've always loved A CLOCKWORK ORANGE. It was given to me as a clandestine book by my English teacher at senior school when we were studying The Catcher In The Rye. He told me reading it made me a renegade. A decade later I was directing Romeo & Juliet and found an energy in the actor playing Romeo that made me think of what Juliet calls him 'A fiend angelical'. There was such extreme pent up volatility in Martin McCreadie's good-boy-gone-bad that I wondered what his bad-boy-turned-good would be like. That's when I made the decision to make A CLOCKWORK ORANGE.

DRACULA came from a deep and dark concern with the horrific and the absolutely awesome. I took that quote from the novel 'Listen to them. The Children of The Night. What music they make' and thought of how important the music of the novel is. That was how I came to the idea of it being Actor-Musician.

4. How significant are production elements such as lighting and set design to your vision of the show?

Very different for every show. A CLOCKWORK ORANGE rolls with one suitcase of props and can be performed in any space internationally with just a table and four chairs. The lighting design becomes very important for Clockwork as the set-up is so simple. DRACULA is a different beast and comes with 46 instruments, wires everywhere and a fully realised scenic SteamPunk design. I think my own personal theatrical taste is one of simplicity, though now having spent some time developing big musicals alongside my own work, I know what can be achieved in major scale theatre – and that's the direction that DRACULA is headed in.

5. Live music plays a massive part in Dracula. Was this always going to be the case from the moment you started developing the production?

I have wanted to develop a large-scale actor-musician show for a few years. I'm an instrumentalist and composer myself and have loved the study of music since childhood. Music always comes first to Action To The Word shows and when I was presented with the quote I mentioned earlier, the concept couldn't have been clearer to me – Music would be at the absolute heart of the production.

6. Your actors are clearly all very multi-talented, being musicians, actors and all very physically fit – do you think having a wide skill set is important for young people trying to get into the industry?

Absolutely vital. All actors, particularly those emerging into the over-saturated industry, need to be able to confidently present themselves, maintain the stamina of any rehearsal procedure and process as well as make an immediate impression.

There is a misconception about our actors having to be muscular. They end up like that due to the vigorous work we do. Most of the productions start their day's rehearsal with an hour of circuit-training/intense workout, lifting stamina, strength and community.

7. You also run an education program – can you tell us some more about this?

As an educationalist and teacher of Shakespeare, I'm incredibly passionate about the work of Shakespeare in schools and young people's lives. We provide extensive language/character workshops and set-up the now established 'BRUSH UP YOUR SHAKESPEARE SCHEME'.

8. You took Dracula and your latest show Rhythm of Silence to Latitude this year – how was that? How did it differ from Edinburgh Fringe?

We had a great time and both show were well received. DRACULA didn't really have much technical time which was frustrating, but by the design-standards of the Festival as a whole, we were lucky with what time we had. It was amazing to perform the show through a Festival PA and it sounded and felt great.

9. Speaking of festivals, you seem to be taking a break from Edinburgh Fringe this year?

I'll be up at the Festival visiting this year but as I'm going into rehearsals for our new Shakespeare IN LOVE/OUT OF LOVE which plays in the West End at the start of September, I'll only be there for the first week.

10. Any exciting future plans the company has that you could let us in on?

A CLOCKWORK ORANGE will tour to Asia later this year and DRACULA is in talks for tour in the near future. We have some other projects in development which you'll be able to keep tabs on on our twitter @actiontotheword

11. Are there any shows you've seen recently that you'd like to recommend? Or any you're dying to get tickets for?

I'm dying to see Miss Saigon. I know the show well, but as I've been in quite intense rehearsals for five consecutive shows, I've not yet seen this version and need to get tickets booked before it closes.

Thanks so much for your time. We're looking forward to seeing more of your work in the future! 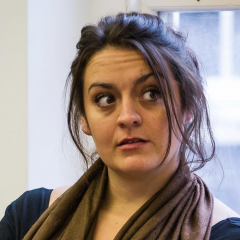 Artistic Director of Action to the Word talks to Voice about the theatre company, the shows she took up to Edinburgh last year, and her future plans