Ellie Hart is a third year BA Drama, Applied Theatre and Education student at The Royal Central School of Speech and Drama. Louise Ripley-Duggan talked to her about her recent placement at London's Young Vic Theatre.

Can you describe your work placement?

In the Autumn of 2014, I spent 10 weeks on a placement at the Young Vic in their Taking Partdepartment. Taking Part work with the local community and young people in the boroughs of Lambeth and Southwark running workshops and full length production projects alongside the shows in the main house. While I was there I worked as project manager on several projects with schools and community groups.

Were there any projects you were particularly proud of?

We ran a project where a group of young people workshopped their own version of The Cherry Orchard - I was project assistant on that show and it was great being a part of the devising stages. Another brilliant project was running the Christmas party for the Two Boroughs project - I was given a budget to manage, which was a great learning experience, and the event was a great success! One thing I remember with fondness was working with a boy who had a severe stutter and helping him with voice and acting techniques I've learned at Central. He got a lot out of working with Taking Part, and I got a lot out of working with him.

The final and perhaps biggest job I undertook was the direction, production and project management of four short videos promoting Taking Part. That was a big project and to have so much responsibility was daunting at first. I managed to get the Artistic Director of the Young Vic, David Lan, in for an interview which was brilliant. Having taken on so much while I was there, but also feeling that I could hold my own, was an immensely gratifying feeling!

What was your work like day-to-day, and which skills did you take from your course into the workplace?

Once I was project managing on several things full-time. On production and workshop projects I got to use my facilitation skills, and when it came to overseeing longer projects I really finessed my arts admin skills. Learning to communicate effectively in a wide range of circumstances is something that is innate in my course, and I found it one of the most valuable skills in the workplace. Working with young people is something which I had had a lot of experience with, and that definitely made my job much easier. Having these things nailed down before I arrived gave me much more space to learn from the experience. I found myself properly able to absorb what was needed of me - from dealing with delicate situations to negotiating situations in which many people wanted many different things and I had to find solutions which would make everyone happy.

Where is this all leading, then?

I feel like I'm really fortunate, in that I went into this placement vaguely aware that I wanted to work in arts admin but that I would ideally like my work in future to straddle education as well. After my time at the Young, Vic, I finally know exactly what roles and in which environments I would like to end up. The dream would be to work in the education department of a theatre again, working not only with groups of young people, but integrating this with a high level of arts administration. Thanks to this placement and to my time at Central, I now know that such jobs exist, and how to go about getting them. 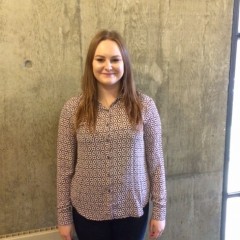 Ellie Hart is a third year BA Drama, Applied Theatre and Education student at The Royal Central School of Speech and Drama. Louise Ripley-Duggan talked to her about her recent placement at London's Young Vic Theatre.