JOELPETER are a five-piece indie guitar-pop band from around Worthing. Elspeth Barron caught up with keyboardist Jack Northeast for pop month, to find out how they operate.

Hi Jack, so first things first, how did JOELPETER come about?

JOELPETER, began as a solo project by our lead singer Joel. The rest of us were just hired in as session musicians but very quickly it developed into a band and the name just stuck because we didn't want to throw everything away we'd already worked for and start over.

You describe your genre as Guitar-Pop, could you give us an idea of what that means to you?

How did you first become interested in playing pop music?

For me, this band. The only other band I'd ever been in was much heavier, but after playing keys for JOELPETER for the first time I was stunned by how much I enjoyed it. Pop music makes you feel good, and I can't think of anything better than writing and playing a song that makes people smile and jump around.

What would you say are the bands biggest achievements so far?

Single of the week on qthemusic.com, home to Q magazine. We've all grown up reading about our heroes in Q magazine so to see ourselves getting recognition from Q was massive. But keep your eyes and ears peeled because there are many more achievements to come!

Now for the dreaded interview question, where would you like to see JOELPETER in 5 years time?

Is there anything else you would like to share with us about JOELPETER or pop music in general?

If you are into Pop music then don't just listen to Radio 1 and read NME and listen to what they tell you to. Get out there! Go to your local music venues, discover a band or artist you've never heard before. Read music blogs, listen to unsigned bands, support local talent, because there are millions of very talented musicians who don't have the luxury of radio play. 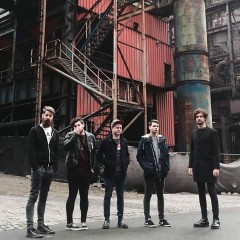 JOELPETER are a five-piece indie guitar-pop band from around Worthing. Elspeth Barron caught up with keyboardist Jack Northeast for pop month, to find out how they operate.