Elections are an integral part of the democratic process. Here we will explain the ins and outs of executing your civic duty

In the UK, we hold elections to select our MPs. That vote, called a general election, decides how many MPs each party has in Parliament, and will subsequently dictate which party will get to form a government.

Until 2011, when the Fixed Term Parliament Act (FTPA) was passed, a prime minister was able to call for an election whenever they liked. The FTPA changed that so, unless one of the conditions was met, elections would be held on the first Thursday of May every five years.

You must register to vote

Regardless of when you registered, you won’t be able to vote in a general election until you are 18.

To be eligible to vote in a UK general election you also need to be the following:

You are excluded from voting in a general election if you are any of the following:

How do I register to vote?

Providing that you meet all of the conditions above, registering to vote is simple, and should only take five minutes.

You will require your national insurance number, or your passport if you’re a British citizen living abroad.

More information, and the link to register to vote can be found on the Register to Vote website.

How do I vote?

Once you are registered to vote, you then need to wait for a general election to be called. You are then able to vote in one of three ways:

If you’re going to vote in person, you will be going to a polling station to cast your ballot. You will receive a letter before the election that tells you where your polling station will be. Polling stations are open from 07:00 to 22:00, so make sure you are able to get on the day, if not, look to vote via one of the other methods.

On the day, voting is very simple.

You will then be directed towards a polling booth which provides some privacy, so people cannot see how you vote. Read the instructions on the ballot paper, as it explains how you should vote.

Typically there will be a list of candidates, as well as the parties (if any) that they are affiliated with, and a box. You should put a cross in the box of the candidate you wish to vote for. Do not make any other marks on the paper or your vote may not be counted. If you make a mistake, just let a staff member know.

Once you have marked your selection, fold your ballot paper in half and then place it in the ballot box.

It’s as simple as that!

To do a postal vote, you will first need to print out and complete a form, and then send it to your local authority. You can find the form on the Government website.

You will receive your ballot papers in the post only after the deadline to become a candidate has passed. If you have any concerns, you should contact the elections team at your local council who will be able to help you.

Once you receive your postal ballot, you will need to make your vote and post the ballot paper back so it arrives before 22:00 on the day of the election — if you don’t then your vote won’t be counted.

It is important when you receive your postal vote that you don’t let anybody else have access to it. Complete your vote in secret, and if possible take the postal vote to the post box on your own. If it’s not possible, make sure you hand your vote to someone you trust. You could also ring your local election team to see if anyone is able to pick your vote up for you.

Once your postal ballot is in the postbox, that’s it, you’re done!

If you aren’t able to cast your vote in person, you might be able to vote by proxy. Unlike a postal vote, you must provide a reason for why you want to to vote by proxy. There are only certain reasons why you can request a proxy vote.

To register for a proxy vote you will need to fill out a form and return it to your local Electoral Registration Office. There are different forms depending on why it is you are requesting the proxy. All of the forms can be found on the Government website, but please make sure you fill out the right one.

I’ve been appointed as someone’s proxy, what do I do?

As a proxy, you are voting on behalf of someone else. You can be a proxy for close relatives, and then two other people. You can only act as a proxy if you are 18 or older. Make sure you know how the person you’re proxy voting for wants to vote.

On the day, you will be required to go to the polling station of the person you’re proxy voting for. You should receive a proxy poll card telling you where this is. It could be different from your own polling station, so make sure you check! If you are unable to get to their polling station on the day, then you can apply to vote for them by post by 17:00 11 days before the general election date.

The person who nominated you to vote as their proxy can still vote themselves, providing they do so before you have voted for them, and as long as you haven’t requested a postal vote.

There may be certain circumstances where it turns out you are no longer able to go to the polling station as expected. You can apply for an emergency proxy from the sixth working day before the election date, right up until 17:00 on the day of the election.

You can apply for an emergency proxy based on either disability, or occupation, service or employment. You will have to fill out a form for either of those situations, and be able to prove that you found out that you can’t vote in person after the usual deadline.

If you want to apply for an emergency proxy based on disability, download this form and follow the instructions.

If you want to apply for an emergency proxy based on occupation, service or employment, download this form and follow the instructions.

If you need information or help, contact your local Electoral Registration Office.

Is there anything else I need to know?

Voting is an incredibly important civic duty, and if it’s your first time it can be very exciting. You might want to take pictures of the event to share on social media — but there are certain things you need to know. While it is fine to take pictures of you outside the polling station, it is important you don’t take pictures inside the polling station, or pictures of your ballot. There are strict requirements over secrecy of people’s ballots, and capturing a picture of someone’s ballot - even inadvertently - could find you in breach of those requirements.

If you move house you will need to register again so your ballot paper is available at your nearest polling station.

This article also appeared on UKPolitics.wtf - a new website that explains how politics in the UK works. 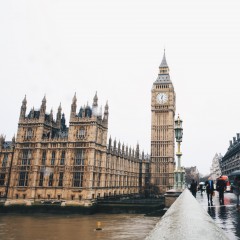 How to vote in general elections

Elections are an integral part of the democratic process. Here we will explain the ins and outs of executing your civic duty