Voice MagHow-to GuidesHow to be an amazing…

Producing, I would say, is like being the bus driver. You’re in control of the journey, and you’re looking after everyone on the bus. A producer’s job is so varied, particularly with a small company. If you’re producing a large, well-known production like the The Mousetrap, for instance, the producer’s job is very different to when you’re producing something like Bouncers by John Godber.

The role of the producer

When you’re a big company, obviously you have more staff on the job. On a small scale, when you’re starting out your own business, the producer does everything, from reading plays, producing plays, getting the casting breakdown, conducting auditions, choosing the actors, rehearsing the actors. Then there are the things that people forget – the things that maybe aren’t the most fun bits of the job – like selling the show.

Get bums on seats

Selling the show is one of the most important jobs as a producer. If you don’t sell the show, then you can’t do the next show, and that’s what it comes down to. Get bums on seats! It’s a boring thing to talk about, but it is something which is overlooked when I go and see other fringe festivals or theatre companies do their thing. It’s glaringly obvious when they’ve overlooked the marketing aspect, as did we when we first started.

Now I know that if we don’t sell 60% on Bouncers then we won’t be able to do another John Godber next year, which is our goal. Having that goal in your mind, as the producer, is very important. Set targets and goals.

Make sure everyone’s on the same page

The producer’s job is to bring everything together and make sure everyone’s on the same page, because a lot of producers keep things secret. One thing we do at Guildford Fringe theatre company, everyone gets paid the same.

It makes things easier because at the first day of rehearsal we can say, “Ok guys, we’re all getting paid this much money, you can all talk about it. There’s no kind of rule that you can’t talk about money.” It means I can also say, “This show’s not selling so well. If you’re bringing people along, then please target these days.”

There’s a really open atmosphere at Guildford Fringe. I think that’s a good way for a producer to be. Some producers are not, some are a bit more closed, which I think is a bit bizarre.

What traits make a great producer?

Motivation and self-motivation are important traits. And without being crass, because I know everyone’s driven by different things, I think being driven by financial gain is a good thing to have. That’s not to make it sound as if it’s all about the money, but I just think it really helps to for a producer to have this drive, because it just keeps your eye on the goal. You’ve got two goals: make the show fantastic, the best it can be, and make it possible, so that you can do it again.

Another trait that’s good to have, not that I always have it, is keeping a level head. Be approachable at all times. That’s also a hard trait to remind yourself of, because you need to be the person who anyone can come and speak to at any time.

You need to take the first risk. The first show will be down to you, your money and your time. For producing, I would be as prepared as you possibly can and go into it only if you’ve got the money to lose. Because your first show, unless you’re very, very lucky like we were, won’t sell out and it won’t make any money.

Even if you do make money, you’ll forget about things like paying your tax. Before you know, that pot of money at the end, it’s gone. Go into your first show with x amount of money you are ready to lose.

Get out there, you’re not going to meet people by staying in. There are a lot of new writing nights, and they’re brilliant. Follow the industry leaders on social media. Find them at those events, and without being annoying, get in touch with them. Maybe write them a letter not an email. The fact that you’ve taken the time to do something like that, eventually they will remember you.

It’s about getting out there: you will not be noticed unless you do.

For more from our interview with Nick Wyshna click here. Nick’s responses have been edited for clarity and brevity.

Nick Wyschna (Managing Director/Founder of Guildford Fringe Festival) trained in Musical Theatre at The Royal Academy of Music, graduating in 2006. As an actor, he has performed in London, on UK tours (he is currently touring the UK in The Mousetrap), international tours (including Mamma Mia!), in TV commercials and cabarets.

Nick set up Guildford Fringe in 2012 and he has been producing theatre, comedy clubs, burlesque, cabarets and Guildford Fringe Festival ever since. He is passionate about bringing the arts together in Guildford, producing shows there throughout the year. 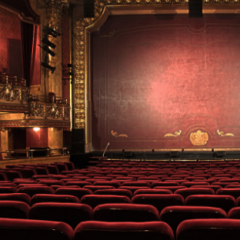 How to be an amazing theatre producer