Voice MagInterviewsWant my job? with Ni…

Guildford Fringe producer and Mamma Mia! actor Nick Wyschna tells us about his experience breaking into the theatre industry

Founder of the Guildford Fringe Festival, Nick Wyschna balances life as a producer and performer. He trained in Musical Theatre at The Royal Academy of Music and is currently tour with The Mousetrap. As an actor, he has performed in London and all over the world, including in the international tour of Mamma Mia!

Nick set up Guildford Fringe in 2012 and he has been producing theatre, comedy, burlesque, cabarets and Guildford Fringe Festival ever since. We catch up with the man himself about his career and what makes for a successful actor-producer. Find out what he said in our interview below.

Hi Nick! Tell us about yourself. What do you do?

I do a bit of everything. I am an actor and producer, I would say. That’s how I normally describe it. I produce all of the shows at Guildford Fringe, the theatre company and the festival. There’s the Gag House Comedy Clubs, and then in my spare time I’m on the road performing in plays and musicals.

Which came first, the acting or producing?

I started my journey in theatre by being an actor. In 2012 I was in South Pacific at the Barbican and the UK tour. It was during that tour that I felt I didn’t be on the road anymore – it’s an odd life. Saying that, I’m on the road now, but I’ll come on to that in a bit.

What made you turn from acting in plays to producing them?

I remember calling my Mum saying, “Oh god, I don’t want to do this anymore.” She didn’t quite believe me. I was expecting to finish acting and go get a job. For my mum’s sake, I thought I’d do one last show in Guildford as my farewell show. I produced it myself, which is a bit self-indulgent. We did The Last Five Years, a two-handed musical.

The show went incredibly well, and it sold out for the week’s run. People were asking what we were doing next. “We’re not doing anything,” I said. “That’s it I’m done.” They kept asking, so I thought, ok I’ll produce one more. Every time they asked us to produce something, and we’d do something else. It just appeared that there was a lack of affordable, fringe theatre in Guildford. So, that became my job.

Now you’re on tour with The Mousetrap! What’s it like to be back on the road?

We’ve come full circle! Last year the company was going ok and I decided I wanted to do a bit of acting and got myself an agent, who I was very lucky to get because I hadn’t done any work for ten years. Now I’m on tour with The Mousetrap, which is bizarre. It was a good journey, but it wasn’t an easy decision to go back on the road.

I can do most of my work for Guildford Fringe remotely, which is the thinking behind this tour. All it means is, I’m not at the show. Which is hard for me, because I love being at the event itself. It’s the reward, watching the show and seeing people enjoy it.

As a producer, does it help to have acting experience?

No doubt! A lot of producers don’t have a clue how the actors actually feel. What they do affects how their tour runs, how their mental attitude is. It all flows from the top. Depending on how the producer treats you, depends on how much fun you have on the job. People don’t get into the theatre for money; they do it because they love it. I definitely think it’s helpful for a producer to know how an actor’s feeling or how things come across for an actor.

What has been your biggest challenge as an actor?

It was always the first job. It sounds a bit cliché, but the circle of people properly working in the industry is tiny. The first goal for any aspiring actor is to get into that circle, and it can be done in lots of ways. It’s a bit of a chicken-and-egg situation, getting that first job.

You need to find yourself a nice agent, one that you really like. You don’t need to strive for the best agent, because, with all due respect to agents, they all do exactly the same job. You need someone you can talk to and you need to get into that inner circle. This can be done through little fringey jobs, networking, meeting people and just generally being a nice person. That’s how I got my first big job on Mamma Mia! Once I’d done that show, I found that it was much easier to get me in the room for other shows.

And as a producer?

Same with producing, you need to take the first risk. The first show will be down to you, your money and your time. For producing, I would be as prepared as you possibly can and go into it only if you’ve got the money to lose. Because your first show, unless you’re very, very lucky like we were, won’t sell out and it won’t make any money.

Even if you do make money, you’ll forget about things like paying your tax. Before you know, that pot of money at the end, it’s gone. Go into your first show with “x” amount of money you are ready to lose.

What’s your top tip for breaking into the industry?

Get out there, you’re not going to meet people by staying in. There are a lot of new writing nights, and they’re brilliant. There are a lot of casting directors, like Debbie O'Brien, who do open calls; they’re not auditioning for a show but to meet new people. Follow them on social media, find them at those events, and without being annoying, get in touch with them.

Maybe write them a letter not an email. The fact that you’ve taken the time to do something like that, they will eventually remember you. The other thing is – whether you’re an actor or director – it is a business, the arts. That’s one thing I always did, the minute I started: I saw it as running an accounting firm or something. I think people forget that.

But most of all, it’s about getting out there. You will not be noticed unless you do.

Responses have been edited for clarity and brevity. 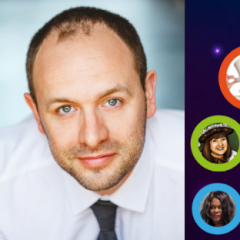 Want my job? with Nick Wyschna

Guildford Fringe producer and Mamma Mia! actor Nick Wyschna tells us about his experience breaking into the theatre industry