Here we bring you an example of a Unit 1 Part C: Research and Review for Gold Hub to help out our readers taking their Gold Arts Awards in which she takes you through her work so far and her intentions! Look at the rest of this exemplar Gold Award Portfolio on Tumblr. Ashlee finished her Gold in time for New Years, 2015.

What arts organisations do you want to focus your research on?

Which arts professionals will you research and why?

I have chosen to research Ashleigh Gray who played Elphaba in the touring production of Wicked from 2014- 2015. I have chosen Ashleigh because Wicked was the first musical I saw that I can remember. She really stood out to be as a performer, anyone who plays Elphaba has to have a strong voice and that witty personality and I think she took on this role perfectly. So much so I have seen her play the role of Elphaba three times since September. The second person I have decided to research was Sara Poyzer, who is currently travelling the world in the international Mamma Mia tour. When I went to see Mamma Mia I didn't really know how I would feel about it since I was a massive fan of the film and didn't know how I'd react to not seeing that cast singing the songs, but as soon as the show began and Sara Poyzer came on stage as Donna, all the doubts I had about the show went away and it was one of the most entertaining and feel good musicals I've ever seen.

How will you find out about the career paths of our chosen professionals?

How will document your research?

I will document my research by putting the answers of the questions into a word document and putting them into my portfolio. I was hoping that I would somehow be able to meet them and interview them face to face but since they're both on busy schedules, the emails were the only option, and thankfully they took time out to answer the questions and email them back.

How do you think your research will influence your own work?

Both Ashleigh and Sara talked about how much hard work they had to put in, to actually make their dream jobs a reality. They both talked about attending stage school, which at first I wasn't to sure whether I wanted to go but now that I've spoke to these professionals I'm becoming more and more aware that this is somewhere I'm probably going to have to go to improve my skills.

What did you find out about the career paths of artists and arts professionals?

I found out that Sara actually started her acting career quite late on in the game, which actually made me feel quite good about myself. I've always thought that if I wanted to act I would have to get involved in it straight away and that once I reached a certain age I would of missed my chance, but after reading Sara's story I realised that isn't the case and you can start your career at any age and still become successful.

What did you learn about working in your chosen art form?

Although they were sure to tell me the difficult parts of touring and doing eight shows a week, like you miss your family and you can't afford to become ill so you have to be extra careful, I already had some sort of knowledge of this lifestyle, hearing it from a professional just makes you realise it that little bit more. I know they wouldn't be saying to put me off; it was more like actor-to-actor advice and helping them make sure that this is what they want to do because it isn't easy. I also learnt how much people struggle to find jobs in the profession, you wouldn't think that because there are so many shows and so many programmes and adverts that all need actors, but there are more actors than jobs so you need to have that tough skin and just keep going after your goal.

How will your present your reviews?

I will present my reviews by putting them into my portfolio as evidence, but also sharing my thoughts live to a group of people. I think I will share my reviews in front of the rest of the youth theatre as they would be interested in getting that inside knowledge of the jobs that they want. They would also be interested in what shows to see as I think you learn a lot as an actor by watching someone live.

What types of arts events or artists have you been most influenced by and why?

The artists that influence me most are the actors that you go and see on stage. Although TV and film is the road that I want to go down, I've always had and will have a passion for stage. Stage is where I started when I was younger and that's what kick-started my interest in acting. The fact that these people go on stage eight times a week and perform in front of all these people is just so inspiring to me. Every night they go out and give it their all so that everyone goes away feeling amazing. There's nothing that makes me feel more inspired than walking out of a good piece of theatre and thinking 'That's what I want to do'

Have your views changed since the beginning of your research?

I wouldn't say my views have necessarily changed, I would say they've became stronger. I've gone through this process with the same thought of 'this is what I want to do' throughout the whole researching part of it. I just think now, although I love stage and I'd love to be able to go out every night and get that buzz from the crowd, I know now that I feel more comfortable with film.

How will you take what you've discovered and apply it to your own practice?

I'm definitely going to take the advice that I was given from Ashleigh and Sara and just keep working hard, maybe now even harder to make sure that I get those parts that I want and don't feel sad or knocked when I don't get a certain role. I'm also going to look more into the different stage schools and think about applying to them next year to get that extra training and opportunities. 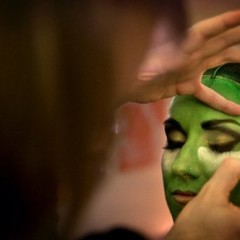 Here we bring you an example of a Unit 1 Part C: Research and Review for Gold Hub to help out our readers taking their Gold Arts Awards in which she takes you through her work so far and her intentions! Look at the rest of this exemplar Gold Award Portfolio on Tumblr. Ashlee finished her Gold in time for New Years, 2015.