This December, we'll be celebrating Arts Award's 10th Birthday by asking you to vote for the best of gaming from the last ten years! Here are some of our highlights to get you thinking…let us know what we've missed in the comments box.

Can you believe Wii Sports is nearly 10 years old! Released in 2006, this game dominated the living room of every family who actually managed to buy a Wii during the holiday season. Allowing players to compete in games of tennis, bowling, golf, baseball and boxing, Wii Sports offered yet another reason to never go outside.

Narrated by national treasure Stephen Fry, it is impossible not to fall in love with the adorable protagonist. LBP was bright and colourful, rewarded inquisitive minds and had amazing audio. The big win for LBP though was the extensive array of user generated content it promoted.

There was a point when Angry Birds was the darling child of mobile gaming. Released in 2009 for the iPhone, this bird flinging game took the world by storm, becoming the most downloaded freemium game of all time. There have been multiple spin offs on multiple platforms, and even expanding out to TV series and a feature film.

Although it has since been superseded by the larger, even more visually impressive spectacle that is GTA V, the fourth instalment really advanced the franchise in terms of scale, and side-missions. The violent sandbox world has captivated audiences for decades, and has been proven to be one of the most successful gaming series in history. But goddamn it Roman, we don't want to go bowling!

We are slightly cheating here by including a collection of games, but it is the only way we could talk about Halo 2, which was completely remastered in this 2014 release. Halo is the game that truly made online multiplayer. A staple in e-sport competitions, the Halo franchise is renowned for its fast past shooting, strategic play, and seamless coop features, even if MCC went someway to undo that work. Playing as Master Chief, the near silent protagonist, always feels epic, and bringing all 4 games, and their multiplayers, to one purchase was a truly impressive feat - when it worked.

No number of arrows to the knee could have stopped Skyrim from skyrocketing, winning numerous Game of the Year awards, and been being considered by some as the greatest game of all time. Released in 2011, the open world RPG still has a very active community on PC, in no small part due to the plethora of mods available. And let's not forget about that soundtrack!

The Last of Us

The Last of Us really pushed the boat out on what was achievable with interactive storytelling. Amazing graphics, fantastic cinematic cutscenes, numerous awards and a very passionate fanbase. This was one of the defining exclusive games for the PS3.

Because he's Batman! While Arkham Asylum was the first game since Spider Man 2 that managed to get superhero gaming right, with amazing fighting mechanics and great immersion, there was certainly room for improvement. City was great, but it wasn't until Arkham Knight that Rocksteady really realised the true potential of the caped crusader, offering true investigative modes, and the coveted Batmobile. I AM THE KNIGHT! 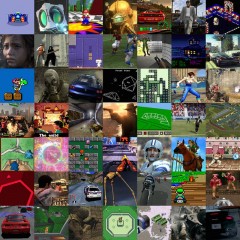 What has happened in gaming since Arts Award was born?

This December, we'll be celebrating Arts Award's 10th Birthday by asking you to vote for the best of gaming from the last ten years! Here are some of our highlights to get you thinking…let us know what we've missed in the comments box.