An exploration of the line between the conceptual and the accessible.

Visual art used to be just that – visual. But with much more modern art requiring descriptions in order to allow the viewer to decipher the messages behind such conceptual art work, is it becoming increasingly difficult to reach a global audience? From representational to abstract, art in general encompasses such a wide range of genres and with many shunning modern art in favour of something more traditional, it leaves us pondering the future of this particular style. But, before I start discussing this in detail I must confess, being a creator and lover of conceptual art I may struggle to offer an objective article. I will however try my best!

Often, contemporary art comes with an explanation by the artist outlining their intent and inspiration. One could argue that this in itself is part of the artwork, enabling it to become more and more accessible, with the text able to be translated into languages according to the audience. Alternatively, it may also be suggested that this text inhibits true interpretation to be made by the viewer, forcing their perception to be skewed.

Another point that should be considered is how traditional visual art may be argued as elitist, only being affordable to the wealthy, particularly when considering pieces made hundreds of years ago. Like many things, the value of art has risen along with its age, yet with new pieces on the market why is it that all genres of art are becoming more and more unaffordable? That's an argument for a different day perhaps. Contrastingly, it is evident how more abstract works have become less universal and not just in terms of monetary value. Ultimately, yes, art has become less universal. However, I believe that this isn't so much to do with the increasingly conceptual nature of modern art, but more to do with the unreasonable overall cost.

Long story short? By making individuals pay for shows, one creates a sense of expectancy or entitlement regarding the artwork itself. This therefore, may cause the audience to expend less effort than needed to understand the exhibition, resulting in a breeding ground of inaccessibility bubbling up from underneath the contemporary art world.

Furthermore, art in general has become less universal on a global scale, with many of the great works both by old and new masters being exhibited in galleries located in expensive areas, sometimes neglecting other places. With various showcases costing money, this should also be brought into view, as only those who can afford to travel, and indeed pay admission are able to see the great paintings, sculptures, and instillations in real life. This shouldn't discount work by artists who publicly exhibit however, such as artist Jenny Holzer, whose 'Truisms' are seen projected onto buildings as well as graffiti artist Banksy, whose work is publicly stencilled or exhibited at a very low cost, (such as Dismaland, a £3 show in Weston-Super-Mare). Personally, I would like to see all art become more universal, and feel that the conceptual variety is accessible to all who try and understand it, even if that means varying interpretations. 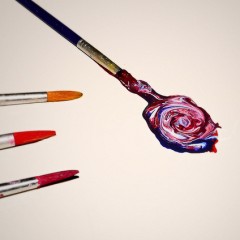 ​​Is visual art less universal than ever?

An exploration of the line between the conceptual and the accessible. 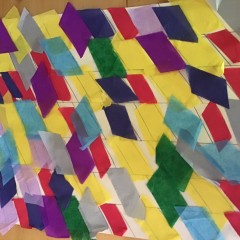 My version of Shadow Play