Voice MagFeaturesPick of the Edinburg…

We return from our third stint at the Edinburgh Festival Fringe with the second award for the best shows we saw during our time there. Ladies and gentlemen, this is our Pick of the Fringe.

This year we saw more shows than ever before. Over 130 to be precise. Our team was bigger too. But with all this growth it means it's harder than ever to narrow down our choices for the coveted award of 'Pick of the Fringe'. It took a lot of deliberating, but we finally got there.

Without further ado, and in no particular order, let's get going.

For the second time, Lili La Scala features on our list because 'she epitomises the Fringe' for Tom. She collates a mishmash of the most talented most exuberant performers at the Fringe for a constantly refreshed and unpredictable show. We ended our time at the Fringe with an encore of AFVS because we knew we'd leave it thoroughly entertained.

Scaramouche Jones in the Underbelly on Cowgate

Scaramouche Jones takes us on a journey of a vast array of characters using only one performer. The monologue broke Josh's heart as he regaled us with his stories of the last day of the year 1999. He subverts the norms of clowning around to bring to the audience an impeccably innovative show that leaves you wanting more.

A knock out stand-up comedian whom Idriss calls the best comedian he's seen so far. His quick quips and amusing banter secured him a slot at a recent Live At The Apollo. He has a versatile humour which can appeal to many an audience and that's what sees him on our list for 2015. His tried and tested brand of gags at the expense of the audience has a bizarrely seductive affect on them. So much so, that by the end of this routine, they're eating out of the palm of his hand.

A rib-crackingly raucous sketch trio who managed to lift Tom out of his work-worn lull. They perform the most irrelevant combination of sketches all in the all-encompassing hope of being watched by bigwigs in Hollywood. Unexpected and brilliant, you'd be mad to miss them.

Nina Conti: In Your Face at the Pleasance Courtyard

Sets herself apart from the crowd on this list by being one of the more famous acts as well as being a ventriloquist. She is in good company though for being remarkable at what she does. Her improvisation and amazing vocal skills made her performance magical to witness for Sally. With her pesky stage-fellow, Monkey up there with her she demonstrated her remarkable skills and left the audience dumbfounded and aching from laughter.

The Gideon and Hubcap Show at the Wee Coo, Underbelly, George Square

Just pure happiness and positivity is what the childhood friends' band encapsulates. Idriss wishes he could give them an extra two stars for their 'incredibly phenomenal' show which dashes away any remnants of melancholia that you might still have had this far into the Fringe. The mix and match between their innumerable instruments – playing each one with as much expertise as the last and well as playing beautifully as a pair. Heart-warming humour to dust off your weariness intrinsic in the melody.

Rob Beckett: Mouth of the South in the Ace Dome, Pleasance Dome

There are so few comedians you can say as confidently as Jo who have 'almost perfect' comedic timing. Even fewer comedians could say something unfunny in such a way that would make it hysterical. His anecdotes made his signature humour universal for any audience. His confidence on stage made him a pleasure to watch. His self-contained eccentricity had the audience laughing from start to finish which, let's be honest, is the most we can ask from a comedian. The Mouth from the South is one you'll regret missing!

The sheer amount of positive adjectives Josh uses to describe any number of aspects of Puddles' show are enough of a reflection of its brilliance (there's one he didn't use). A sad clown who, despite his chronic forlornness, bring brightness and show stopping awe to the room. He is as mesmerising silent as he is belting outloud. The cringe of the audience participation is the cherry on top of this soggy looking but delectable tasting cake. Another show that '…the Edinburgh Fringe is all about.'

My own gem of the Fringe. Last year, one show stood out for me. This year the same has happened but this time, it's Frillemorphesis. He could well have been making up and improvising the entire show. I am happy in not knowing whether or not he was because I can live happily just believing it was. A robust demonstration of the born talents of this frightfully genuine comedian. He told us about his issues and not once did we feel any sadder for it because of just how dysfunctionally eccentric he was. A magnificent performer who oozes what comedy – and the Fringe – is for me.

Jess Robinson: The Rise of Mighty Voice in the Pleasance Dome

Jess Robinson's show had it all for Jo. A phenomenal voice, hilarious humour, and extraordinary charisma. The pair of Jess and her backing singer perform a fresh show every time they perform. Their harmonies are magnificent and, as it says on the tin, are pure might. The delivery of this show demonstrates that you don't have to be world-famous to be a superstar because that's what Jess Robinson is. Listening to the pair for an hour will leave you feeling invigorated and on your feet in awe.

A completely confident albeit belligerent comedian who isn't afraid of telling you who he is, what he's done, and how stupid he is for those things. He delivers all of this to us with no sense of remorse. In a lecture hall, I felt a certain obligation to hang onto his every word. As he made the auditorium erupt in all manner of silly noises he had a universal appeal which had us laughing from start to finish. The fledging Edinburgh comic has his uniquely diverse crowd eating out of the palm of his hand as he regaled us with one ridiculous antic after another.

One of last year's award winners.

Tatterdermalion at the Assembly Roxy

The Voice Thief at the Summerhall

How To Read Minds And Influence People at the VooDoo Rooms, West Register St.

A huge congratulations to all who made it onto this list, and we wish you all the best with the rest of your Edinburgh run!

To read all of the reviews and blogs we wrote during Edinburgh this year, check out the Edinburgh Festival Fringe Voicebox 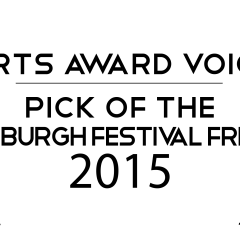 Pick of the Edinburgh Festival Fringe 2015

We return from our third stint at the Edinburgh Festival Fringe with the second award for the best shows we saw during our time there. Ladies and gentlemen, this is our Pick of the Fringe.