Voice MagFeaturesTop 10 albums of the…

10 years of changing music tastes... not all of it was cringey!

Here we are at the end of decade, and it's wild to look back at how things have changed over the years. We may try to pretend that we weren't dancing around our room to Katy Perry, or drunkenly screaming the words to Arctic Monkeys, but deep down we look upon our music tastes with nostalgia.

I'm here to dig up that nostalgia with 10 definitive bangers that defined the twenty-tens!

All I’ll say is that the music videos from this album are all individually iconic. After the number of times I blasted this album on the pink CD player in my room, I don’t know why my family didn’t realise I was bisexual at the time?

Although I don’t think I’ve listened to any of the songs on this album since I was a pre-teen, this was an era few millennials will ever be able to scrub from their retinas. Also Lenny George, am I right?

Set Fire To The Rain is up in the top ten of my favourite songs ever recorded. This entire album soundtracked my early teenage years, before I obsessively tried to learn the entire album on the piano. Spoiler alert, I failed miserably.

The sheer number of hits on this album that are still played millions of times a day across the globe is a living testament to the talent Adele has. But looking to the future, I for one cannot wait for her next album.

When I heard this for the first time I cried. When I hear it now I still cry. I’m pretty sure anyone will agree with me when I say that this was one of THE albums that soundtracked 2012., and Read All About It, Pt III is the best of the best. Since it was released, there have been millions of covers and lyrical dances  – all of which are beautiful. As for the rest of the album, with Sande’s honey smooth vocals reign supreme.

Favourite Track: Read All About It, Pt III

This album, and ‘Wrecking Ball’ in particular, changed pop culture irreversibly. Gone was the doe-eyed, country-girl Hannah Montanna me and multitudes of teens grew up with, and in her place was an absolute savage.

I mean, who wouldn’t want to be swinging around on a massive wrecking ball with a blonde pixie cut? This whole album, in my opinion at least, marks a definitive shift in the way music was marketed. Gone were the serious and emotional tracks like ‘Fix You’ and ‘Read All About It’ and in their place were memorable videos poised to go viral. For that reason alone Cyrus deserves a mention here.

Picking one album from 2013 was actually way harder than I thought, it’s the year I actually started choosing what music I wanted to listen to and I started to discover new bands and genres myself. Part of this included many of the tracks on One Direction’s ‘Midnight Memories’ album that were (for a 13 year old pop fan) really rocky and I realised that I was actually a big fan. So for that I can’t not mention ‘Midnight Memories’ for personal reasons.

Before Ed Sheeran released Multiply I’d only ever heard ‘A Team’ on the radio in my dad’s car. Fast forward to him performing ‘Bloodstream’ at the Brits and I was hooked. Fourteen year old me was completely fascinated with the concept of a pedal loop and then over the next few months you could find me viscously learning all the raps scattered across this masterpiece.

A list of top albums by yours truly wouldn’t be complete without a mention of the Australian powerhouse known as 5 Seconds of Summer. This entire album was written and recorded in the space of two months at pop punk extraordinaire John Feldman’s studio. The result? Some of their most underrated tracks all about the turmoil and anxieties of trying to fit in.

The lyrics are incredibly raw and at times gut wrenching with the likes of ‘Broken Home’ and ‘Invisible’. However, the complete masterpiece is the final track(s) ‘Outer Space/Carry On’.

With swooping harmonies and a hopeful message that leaves the album with a silver lining, it’s no surprise this debuted at no.1 on the Billboard chart, thus making them the only band to have two consecutive albums top the album chart. A record they’ve since beaten with the release of their third album ‘Youngblood’.

Pioneering the ‘visual album’ format this was a truly groundbreaking album and one that paved the way for *that* iconic Coachella performance. All hail Queen B…

I think the fact that the entire UK Chart rules had to be changed because of this exact album is a big enough reason to have this album on this list. Still not convinced? Aside from the entire top ten literally just being this album, and ‘Shape of You’ being the most streamed song ever, I shouldn’t need to convince you that the album is deserving of its place on this list.

Somehow Sheeran managed to take everything good and beautiful about ‘X’, amplify it and add in some Irish country and pop influences to the cauldron. What’s resulted is some bangers like ‘Galway Girl’ and ‘Nancy Mulligan’ interspersed with slow ballads like ‘Supermarket Flowers’. Divide will go down in history for all the right reasons.

Dubbed ‘the band to save the world’, this album made waves on its release. Critically acclaimed, every track on it is so unique.

My own personal favourite track is ‘I Like America and America Likes Me’, which is a commentary on the gun violence crisis in America. It’s a crisis incredibly close to my heart and its lyrics give a new perspective on the situation from the point of view of American teenagers who are affected by this problem daily.

Favourite Track: I Like America and America Likes Me

This year Billie Eilish has just blown up from (seemingly) nowhere. She’s truly killed it this year, receiving six Grammy nominations (the youngest ever in four of them) and even graced Reading & Leeds Festival, drawing crowds bigger than The Foo Fighters despite playing mid afternoon. She also writes all her own material with her brother Finneas, something not every pop artist can claim. If this year is anything to go by, this duo are poised ready to take 2020 by storm..

Favourite Track: you should see me in a crown 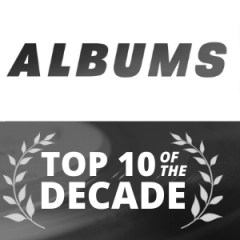 Top 10 albums of the decade

10 years of changing music tastes... not all of it was cringey!