Looking for a list of the best music to come out of 2019? Well look no further as I've collated the best of the best, the bangers to get you bopping, the chords to make you cry, and the tunes to truly send the decade out in style.

Bring Me The Horizon - amo

Despite Bring Me The Horizon delving even further away from their hardcore metal routes this year, their album amo didn’t disapoint. While it definitely has some tracks that are too far into the ‘pop’ genre to be on brand, their self awareness of this is amazing. Also having a song play on radio with the chorus lyric ‘we’re so full of S(ugar), H(oney), I(ce) and T(ea)...what’s not to love?

Ariana Grande - Thank U, Next

2019 was, without a doubt Ariana’s year. With a stellar album, insane tour and even more dizzying levels of success the whole team at Voice are in awe of the (however many dates) long tour she’s just finished like an absolute trouper.0

Juice Wrld was a trailblazer in rap. With some fantastic collaborations that got me listening to his music this year, I was (and frankly still am) in utter shock at his passing. This album will always be a testament to his rising success and I can only hope people will continue to listen to his music a realise what talent was lost.

Billie Eilish - When We All Fall Asleep, Where Do We Go?

Another badass woman that is crushing it in music. With arguably, the biggest album of this year, the talent Eilish has as a songwriter and producer when her and her brother come together is limitless. While she may be stirring up controversy by advocating for Extinction Rebellion while galavanting around in her private jet, there isn’t a single doubt that her music is top notch.

Favourite Track: you should see me in a crown

BTS - Map of the Soul: Persona

With a rise to fame that has been slowly growing over the past two years, the talent on this record is huge. From features with Halsey and songs co-written with Ed Sheeran, this album doesn’t disappoint. Now, if you’re sitting there thinking ‘but it’s K-Pop, so what?’ if I can convince you to do one thing this year is to listen to (one of my favourite 2019 tracks) Dionysus – all about getting drunk and having a good ol party it’s a certified bop. You’re sure to love it regardless of what language the lyrics are in.

Beyonce’s Coachella performance will forever be iconic. So is the album of her live set. Nothing else needs to be said on this matter.

I have a confession to make everyone. When I first listened to this song, I cried. I still don’t get how one Scottish man can go from making me sob with one of this generation's best voices to making me cackle with laughter every-time I see one of his tweets on Twitter, so if anyone has any answers please send them my way! Along with his pioneering measures to help his fans suffering from anxiety at his shows, there’s nothing not to love about ‘America’s Sweetheart’.

Favourite Track: Before You Go

I’ll never forget working at Wilderness Festival in 2018 when Bastille headlined the whole thing. Dancing around with the rest of the backstage team in the pit I’ve never felt more alive. I’ll also never forget the band’s faces when Dan (lead vocals) announced the name of this album almost an entire year before it was finally released. Naturally I had high expectations and, in true Bastille style, they were all surpassed.

If indie music isn’t your *thing* there’s such a range of genres on this album that there’s bound to be at least one song you like.

With the recent release of the documentary and album ‘Everybody’s Everything’ it was impossible to not include Lil Peep on this list. Despite the media circulation and conspiracy theories surrounding his death, it’s important to remember him for his phenomenal music. That talent is clearly displayed throughout the entirety of this album and everyone should give it at least one full play through.

If there’s one thing that the mushrooms Styles took while writing this album did, it’s help him capture an emotion in each song. From jealousy, hope and self loathing there’s not a single song without an intrinsic emotion attached to it.

Some songs may hide it much better than others but they’re all there. Alongside Style’s ability to perfectly thread his musical influences from icons like Pink Floyd in ‘She’, to David Bowie in ‘Fine Line’, his sophomore album has only further affirmed his rockstar status in music. 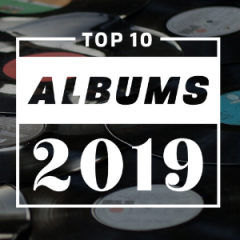