Francesca Morgan was named a winner of the 2019 Orwell Youth Prize for their short story, The Faceless Drug.

“I’m not sure about this,” she muttered as the needle was placed in front of her.

The nurse smiled sympathetically, “Trust me, it doesn’t hurt a bit.”

“No,” she looked up at the nurse, “I mean I’m not sure about this morally.”

With a response so well-rehearsed there was barely a pause, the nurse said “Moral Code 52, issued by The Government of the United People of Earth, states that: ‘the use and distribution of the Juror Drug is found to be not only legally applicable but also advisable in all 7 states of the world.’”

“Right… great.” She said with a sigh, turning her gaze to the rain dribbling down the window. “Can I have a few minutes? I just want to think.”

“Of course, whatever you want.” The nurse gave her an exasperated look and waddled out of the examination room with a series of squeaks resonating from her uniform-blue crocs.

Once the nurse left her alone, she could deliberate.

She knew what the government said about it: a drug that blurs the face of the accused. How brilliant! Finally, each member of the jury could decide on the verdict with no leniency, no bias. Instead of swaying for or against the defendant based on their appearance or their emotional presentation, jurors can deduce the sentencing founded on cold, hard facts.

She also knew what the newspapers said about it: a drug that not only blurs but is also said to reshape the face of the criminal defendant. The jurors told tales of feeling instinctively disgusted by the litigant, of seeing no longer a human, but an animal. It was suggested that the drug led to unjustly harsh judgments. Petty crime had ended in life sentences; embezzlement had resulted in the death penalty.

“Ok! Are we ready then?” said the nurse as she popped her head around the door with that same, unshakeable smile.

“Well, you’ve got to make up your mind. It’s not yet compulsory for jurors, but it’s highly recommended.” “

Yeah.” She thought for a moment. “Well, if The Government is advising the drug, I guess I’ll take it…”

“Wonderful sweetie! It should take a few minutes before it kicks in.”

“Ow!” The next thing she knew, the nurse had jabbed her arm with the needle. The horrible icy sensation of an injection spread through her left bicep. Then she was hastily guided out of the examination room and directed along a corridor before entering the place she had been dreading for weeks: the courtroom.

The other jury members were already seated, all with similarly dazed expressions. The defendant was only a few feet away and consulted his lawyers in nervous whispers. The first thing she noticed was how young he was. 19 years old? His eyes were bright with adolescence and his hands were strong but marred with callouses that stretched along the juts of his knuckles. She saw his eyes glaze over with tears before he rubbed them away hurriedly and his hands picked at his trousers in a fiercely agitated manner.

She wanted the drug to kick in. She didn’t want to see him. She wanted to see a monster.

And then, as if by magic, his body altered.

It wasn’t an overt change. His features sort of blurred and the edges appeared worn away. His skin seemed to droop like a painting left out in the rain. His mouth -once a pink oval- formerly opening and pursing in tense murmurs had gone, and in its place was a vacuous streak contorting into inaudible mumbles. Her eyes gently traced his face: moving around the pixelated rim; across the brow; down into the furrows; up to the sickly glow of the eyes. She followed the foundations of what had been a face, ten minutes ago.

He was still scared… at least she thought he was. The flustered motions of a desperate man were still recognisable in theory, but they no longer had the same triggering effect on her conscience. In fact, if she forgot what he used to look like then he could only be described as a monster.

She remembered; so she let herself forget.

She let herself forget; so she reinvented.

She could see the actions for what they now were. They were the marks of a Machiavellian psychopath. Yes! She laughed out loud. How could she have overlooked this before? The whispering and the subtle tears, they were the sly forgery of sentiments. People like him couldn’t feel real emotions.

She gripped the oak panels that lined the jury box until the tips of her fingers turned white. She couldn’t hear anything above the ringing in her head. The words of the lawyers were wasted, for the jury box was nothing more than an animal pen, and very soon every juror’s lust for blood would be satisfied.

It took them all of 5 minutes to decide the man’s fate. He was guilty of course; that’s what they said. They never saw his face after they convicted him, never saw his face again. But she wouldn’t forget him, the dampness of his eyes and how his hands picked at his trousers. How she had taken the drug knowing what it would do. How she had chosen to see him as an animal. How she was forced to see him as an animal, because if she had seen him as a human how could she have justified his sentence?

How could you ever justify sentencing another human to death?

We interviewed Francesca about their entry, and you can read the interview here. 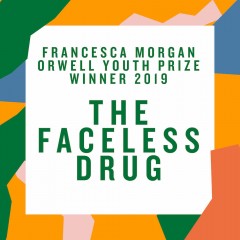 Francesca Morgan was named a winner of the 2019 Orwell Youth Prize for their short story, The Faceless Drug.