Francesca Morgan was an Orwell Youth Prize Junior winner in 2019, responding to the theme ‘A Fair Society?’. We asked her where she got her inspiration for ‘The Faceless Drug’ and what motivates her to write.

Since reading an Orwell essay (‘A Hanging’) I was struck by the inhumanity of the death penalty. The incongruence between a man’s death and the amicable drink after the event was masterfully conveyed by Orwell. This inspired me to consider methods in the future which might purposefully remove emotions from judicial sentencing.

Why did you pick the form you did?

I did pander with the idea of an essay. However ultimately, I believe that only a story narrative could properly convey the mess of emotions experienced when dealing with a topic as sombre as the death penalty.

The reason I write is a fairly selfish one if I’m being honest. I write in order to identify my own opinions on a subject. I find that only by the end of a story or essay have I established my views.

Write about something you feel innately passionate for. Don’t be scared of putting your views out there for others to disagree with. So long as you are writing about a topic that inspires you, you can’t go wrong.

What's a piece of writing that has influenced you?

Recently I read ‘Stoner’ by John Williams. It’s a story following one man’s ordinary life but Williams manages to mould a fairly bleak existence into a tale demonstrating the epic of the everyday.

You can read Francesca's winning entry, The Faceless Drug, right here on Voice. 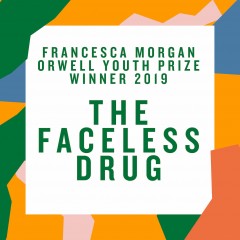 Francesca Morgan was an Orwell Youth Prize Junior winner in 2019, responding to the theme ‘A Fair Society?’. We asked her where she got her inspiration for ‘The Faceless Drug’ and what motivates her to write.