Drama student, Kheira Bey, has recently joined the Arts Award Youth Activist Team. She can generally be spotted in the South East, and has completed her Silver and Gold Arts Awards.

Kheira, from your interests you seem to dabble in many different art forms. What is your main art form and which other art forms did you cover in your Awards?

That's very true, I do dabble, but that's what I loved when completing my awards - I could try a bit of different things. For my Silver I organised and presented a 'Poetry by Heart' recital evening in my school, which was a bit different for me as my main art form is acting, so to read poetry was more emotive and intimate. I also became an artistic director for Unit 1. For Gold I wrote a play and did a bit of Shakespeare, whilst also picking up my choreographer's hat. Very varied but I think acting and the ability to tell a story is what I do best.

When did you realise acting was for you?

I think it was a combination of an innate desire to be someone else and not feeling 'right' in my own persona, so when I first went to drama classes - being someone else came naturally. Coincidentally, I have been a strong writer from an early age, which possibly helps the ability to express emotion.

Do you have a favourite actor, or one who particularly inspires you?

This is a question I get asked a lot when I first meet other performers and if I'm being honest I like to subvert the question. From experience on sets, the amount of direction some stars are given is incredible so of course they will look great on screen. The directing process is perhaps more inspiring for me as you see the transformation taking place first hand, a bit like rubbing a lamp and finding a magical Genie appear! That said, Kate Fleetwood's Lady Macbeth is to die for and when I have read the feisty female protagonists' of Tennessee Williams' work, the character which forms in my head is definitely awe-striking.

What was your biggest challenge when achieving your Arts Awards?

Just one? Within the year of completing my Gold Arts Award I was undergoing major life changes: school got hectic, 15 drama school auditions took over my life, a Shakespeare tour and various short films... and not to forget my part time waitressing job! So at times I was barely sleeping and I often arrived at rehearsals lethargic and physically exhausted, so I did delegate and of course sometimes you need to do those tasks you are delegating! But, c'est la vie, I changed the idea to make the task more feasible.

Why did you choose to do Arts Award?

I was first attracted to Arts Award when a teacher tried to pitch the Duke of Edinburgh Award to me. Being the person who likes to sleep without bugs nearby, in a bed and shower... I wasn't feeling it! Arts Award was more my thing and I enjoyed the idea of taking my arty hobby to another level.

Becoming an Arts Award Activist! Alongside this I've just completed my first ever full length play script, which I will be directing as a new debut production next year. You may hear about this project - script to set to sell out tour - on Voice! And the waitressing job is still in the picture alongside drama training. 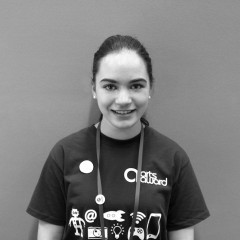 Drama student, Kheira Bey, has recently joined the Arts Award Youth Activist Team. She can generally be spotted in the South East, and has completed her Silver and Gold Arts Awards.