Chingford Foundation School's Luke Hasler came to our attention after completing this stunningly detailed project, which has been drawing a fair bit of attention as it travels around the Chingford area! He's taken it to schools to show children as young as 4 and 5 the realities of trench life. Far from finding it difficult to take on, they've responded incredibly well, understanding the gravity of the situation, and the lives that were lost in the trenches. The detail and effort put into this project really are exceptional, and we would encourage anyone thinking of completing their Art Award to consider the WW1 Special Edition. We caught up with Luke to find out how the work came about.

How old were you when you started doing Arts Award?

I was in year 7, so 12. That was my Bronze, and I did my Silver in year 8 and 9. Now I've just done my Bronze in WW1. I want to do my Gold next, which is quite complicated. I did visual art for this and my Silver, but I'd prefer to go back to acting for my next one. I like the wacky roles. Last year I did a play called Alice, which was a take on Alice in Wonderland and I was the Cheshire Cat. Everyone was modern day people, so my character was a very strange...I don't know what the word is. He liked Alice shall we say! It was brilliant, I got everyone laughing, I like it when I do that.

What's the most enjoyable part of doing Arts Award?

I like watching the plays a lot, and researching is always interesting to me. For my Bronze I studied Roald Dahl and I wrote a book about him. He's very interesting, he's had a very fantastic life. He ran out of fuel over Egypt in WW2 and crashed down. He also invented a thing that goes into your brain that stops water on the brain, because his little boy was hit by a bus at the age of 3 and got water on the brain.

What do you think the biggest challenge of doing Arts Award is?

I think writing up the portfolio is quite hard. It takes a lot of time, and you really have to think about it. I always take a lot of care to read it first so I know what's expected, but I don't close my project around the booklet. I like to keep the project open to changing.

Were you interested in WW1 before you started on this project?

Very. My family did a family tree, we got all the way back to the 1700's, and we noticed that one member of our family, William George was killed in action and the big memorial, the Menin Gate, he's on there and I got the chance to visit and lay a wreath down. I knew exactly where he was.

Tell me a little bit about how these items were made.

All of my stuff's recycled. In the First World War, they didn't have the materials, so they had to work with what they could. For the cross I've used barbed wire and nails. I wrote Known Unto God on the cross, because with all the unknown soldiers, you'd write that on their graves, I saw that when I was in France. A large majority, maybe 50 percent of the dead, never became known. A lot of them are still in the fields. Most of them didn't even get graves. It didn't need to look nice. I also wanted the trench to be real, I didn't want to sugar it. When you see the trench there's lots of blood, there's lots of death. The only thing that was missing was rats, because I couldn't work out how to scale them down small enough. I also looked at some pictures of actual deaths. There was a man who was trapped hanging on barbed wire, so I put him on. I wanted to add reasonable details to the soldiers, so there's skin colours, blood, mud.

What have you been looking at for this project, was it poetry?

I've seen a lot of films for WW1. For part B I went and saw War Horse, which was really good. I love puppetry, and they really brought it alive. They really did it well. I knew a lot about WW1 already, I'd watched the films and read the books. There are so many and they're all very good. I find romantic films don't fit in with WW1, I remember watching a film about WW1 that went back and forwards between two people, and I know it fits in with the idea that loved ones were lost, but I didn't enjoy that.

And finally, what advice would you give anyone wanting to start Arts Award?

I would definitely say get your family involved as you need some sort of help. Even if that help is getting materials. I would also say, if you're going to do research, do extensive research. Don't just do a little bit. You've got to be bold, if everyone at the end is interested in what you're saying it doesn't matter what you're talking about. You could be talking about One Direction or Monet, it doesn't matter, if people are interested at the end. If they're not, you haven't really shared your knowledge. I think that's the most important thing. 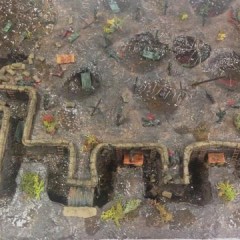