As it is the first week of Black History Month, this week’s five tracks will be focused on Black musicians that are releasing exciting music right now.

As always, the tracks reviewed can be found in our spotify playlist, found here.

PinkPantheress - I must apologise

PinkPantheress is an artist that has been gaining increased traction in pop culture as of late due to her string of critically acclaimed releases over the past year. I must apologise is no exception to that trend. Although the track is less than two minutes long, which is not unusual for PinkPantheress, it is packed with a copious amount of sonic diversity, packaged within a bite of drum and bass inspired electronic pop. Her sound can be likened to that of Aphex Twin in parts, with added calm, high pitched vocals that cut through the barrage of subtle lo fi synth and sub bass. The sample use of Crystal Waters ‘90s hit Gypsy Woman is another clever component that gives the song a pleasantly spacey retro vibe. The track is set to be featured on the artist’s debut album, to be released 15 October.

Muroki brings a lighthearted and funk-laden feel to his new track Surfin, which juxtaposes the rather dark lyrical content found within it. The song is built around a simple but effective bassline and slightly shuffling drums, which gives a faux sense of happiness alongside the artist’s poppy voice, which vocalises the struggle that a person who is homeless may feel. The lyrics are cleverly written, and although straightforward, paint a vivid picture of how a homeless person would feel day to day, the coldness of sleeping on the streets at night, the embarrassment of asking friends to use their couch, and the feeling of hunger. The track is written in a way that keeps this substance in the forefront, without overbearing the listener. It still allows for the track to be enjoyed in a pop sense, describing a subject that is anything but easy to digest in a way that is immersive, informative, and personal.

Rising R’n’B star Koffee has recently released the track West Indies, an energetic affair that is a love letter to the culture that has made her. The track is a club hit for sure, abundant with tasteful synth, heavy electronic bass, and an afrobeat rhythm. “Put some passion into this,” Koffee explains, urging listeners to take pride in where they come from in a celebration of West Indian culture. The musician often uses West Indian slang, which brings about an indigenous aspect of the music that adds further to its authenticity. Frankly, the track sounds like a load of fun, and Koffee has a sound that although takes from classic Caribbean music, still stands on its own and has its own vibrant personality.

One of the more subtle tracks reviewed this week, Cktrl’s Zero is an almost ambient experience, utilising minimal synth alongside dissonant clean guitar licks and a muffled beat. Joining Cktrl in the track is Mereba, who lends her unique blend of folk and R’n’B to the track, in a way that is sultry and reserved yet completely engaging. The same can be said of the track’s use of guitar. Although instrumentally the song doesn’t have as many components, this allows for the guitar to breathe, and it has ample space amongst the rolling ambient synth in the backdrop. Towards the end of the track this subtle guitar gets far more immediate, and more complex, before evolving into a pleasant saxophone solo that sees out the end of the song. The track is an experience that highlights the space between the instruments perfectly, and is more of an artistic statement than a pop hit, it is thoroughly enjoyable and intriguing to listen to.

Masego has returned, after initially finding fame working with artists such as FKJ and Tom Misch, the singer has recently teamed up with rappers Big Boi and JID in their song Garden Party. Another relaxed affair, the track starts off with a cheeky intro that sets the tone of the song. It is laid back, jokey, and a little laddish, but in a way that is tasteful and suits the chemistry of the artists involved. Garden Party seems to imbue a similar R’n’B and hip-hop hybridity to its sound, echoing that of Bone Thugz-n-Harmony or classic ‘90s artists. The song doesn’t sound dated though, with crisp and subtle production complementing each artist’s feature. The song is layered with multiple instruments, notably, a saxophone that follows a recurring “Nanana” refrain that is particularly enjoyable. Both rappers JID and Big Boi perform excellently on the track too, showcasing impressive lyrical chops whilst still sticking to the laid-back style of the song. This track seems to showcase some of the last remnants of that summer feeling, and does it well. 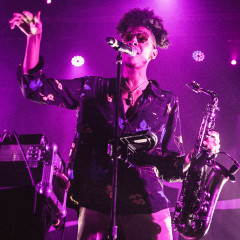 As it is the first week of Black History Month, this week’s five tracks will be focused on Black musicians that are releasing exciting music right now.