Another installment of five of our favourite singles that have been released over the past week, from an array of genres. As always, please comment and let us know your thoughts on the tracks chosen!

Daniel Lopatin, the avant garde producer also known as Oneohtrix Point Never, has arguably one of the most uniquely individual sounds out there, and has surprisingly amassed an extensive discography of collaborative songs. His most recent collaboration comes in the form of Elizabeth Fraser of Cocteau Twins fame, in a reimagining of the track Tales From The Trash Stratum, which is featured as a bonus track on the Blu-Ray edition of the record Magic Oneohtrix Point Never. The track is as glitchy as Lopatin’s original version, however, instead of abrasive synths and sharp strings, the track opts for a softer flavour, which compliments Fraser’s sporadic but calming vocal flourishes well. The track is more of an experience than a song, a texture adventure enveloping ambient sounds, chiming bells and plucky, eastern inspired guitar, interspersed with dissonant piano notes and finally concluding with a clean, melancholic melody.

In what is more of a straightforward affair in terms of song structure and pop sensibility, Glass Animals have returned with their newest single, I Dont Wanna Talk (I Just Wanna Dance). It is exactly what it says on the tin, a bouncy, energetic and fun pop track that scratches the itch for simple but catchy synth leads, stellar production and a pleasant vocal. The track is definitely danceable, driven by a prominent bassline and spacey vocals. The chorus is sung in falsetto and showcases vocalist Dave Bayley’s impressive range. Complete with an inescapably addictive dance hook, the track is revelous from start to finish.

Stereophonics -  Hanging On Your Hinges

Classic alternative rockers Stereophonics return with a track that brings about their punkier nature, as opposed to the more palatable past hits that have made them household names within the radio rock scene of the 2000s. Hanging On Your Hinges is a blues-tinged romp that follows a blistering riff from guitarist Adam Zindani that spans the majority of the track. Stereophonics live up to their professional experience as a band, proving their expert proficiency on each instrument within the track. This is without making it too complex, not taking away from the captivating vocal melody and charisma of singer Kelly Jones. The track brings an energy that is asking for live performance, and will undoubtedly be a favourite when performed in such a setting.

Manic Street Preachers have added to their illustrious back catalogue, which started back in  the early 90s, when the band conquered the world with their punk influenced hard rock sound. The band have just released their fifteenth album, The Ultra Vivid Lament, which is the first of their records to be written on piano. Lead single Orwellian demonstrates this switch in songwriting style through a song that encapsulates the best parts of the Manic Street Preachers, whilst still progressing their sound into new, more orchestrated territory. The track is of course softer than what many would expect from the band, but doesn’t completely abandon their hard rock tendencies, sprinkling in guitar licks and punchy drumming throughout. The track is more like a pop track than a rock one, likened to ABBA, but still has a statement to it, as would be expected from a band as politically driven as themselves. The sentiment is apocalyptic, but isn’t evil or condemning, rather trying to guide the listener through the envisioned chaos.

Rounding off this week’s picks are the experimental musical duo Low, who have recently unleashed their latest record, HEY WHAT. The album is a treat across the entirety of its run time, managing to further develop their sound from their past work on Double Negative, implementing the dark tonality of that record, whilst facilitating a more immediate sense of thrill and intensity. Days Like These is a standout performance on HEY WHAT, showcasing the soundscaping talents of Alan Sparhawk and MImi Parker. Instantly, listeners are barraged by the heavily compressed vocals of the two musicians, layering over each other in an otherwise instrumentally sparse first couple of minutes. The vocals get more and more distorted and intense as the track climaxes into a caustic wall of noise, before calming into a reverb laden melody on keys, cascading into rolling, disparate notes accompanied by an operatic ambient vocal backdrop. The track is produced with such intent, and the soundscape created is gargantuan, harboring vastly different sections but still feeling cathartic, cohesive and moving. 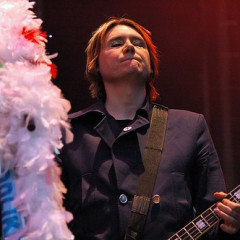 Another installment of five of our favourite singles that have been released over the past week, from an array of genres. As always, please comment and let us know your thoughts on the tracks chosen!