Back again with this week's newest releases, have you had a listen? Let us know what you think!

ABBA - I Still Have Faith In You

ABBA - I Still Have Faith In You

After a four decade absence, in a move that no-one could have predicted, ABBA have returned with an epic five minute long track, scratching the itch that only ABBA can reach, whilst also giving listeners a more updated and evolved sound. The song starts off slow, with minimal instrumentation, mainly riding on a piano section and a superb vocal performance. ABBA slowly adds more and more layers – at first subtle violins, then rolling drums, and a surprisingly explosive distorted guitar towards the end. Lyrically, the phrase “Do I have it in me” repeats often, eventually developing into a triumphant chant, declaring: “We do have it in us”. Seeing ABBA return with such positivity in a world that seems distant from when ABBA were at their peak is a powerful statement – we need ABBA now more than ever.

Little Simz, undoubtedly one of the most talked about rappers within the UK scene today, returns with her newest album Sometimes I Might Be Introvert, off the back of 2019’s critically acclaimed, Mercury Prize nominated album Grey Area. The album itself is not one to overlook, with some of her most cutting edge and personal lyrics to date, opting for a more subtle, soulful, and jazzy approach when compared to the aggression of her last project. ‘Woman’ is a standout performance on the album, with Simz showcasing her feminist mentality and struggle with such personality and finesse that it screams utter professionalism. Not only can Simz spit thought-provoking verses but she can marry the lyrical themes perfectly with her beat choices. The track is a minimal affair but still chock-full of substance despite being a little more calculated and less intense compared to her past work.

Hot off of headlining the main stage at Reading and Leeds, Biffy Clyro have released the first single from their upcoming record. This track is a long one, reaching just over six minutes. It is introduced by a simple organ passage, combined with Simon Neil’s inimitable voice. The track develops further and further as its length progresses. By the halfway mark, listeners are treated to powerful staccato guitar which evolves into pure riffing – probably some of the most immediate that the band has offered thus far. The chorus is catchy, with a repeated refrain of “We are on our way together / Into the unknown”, which is powerful in conjunction with the heavy and prog-style guitar work and a bouncy bassline. Alongside this, the band still sticks with a slight pop rock structure that bolsters the song's accessibility.

Being the shortest track mentioned in this piece at only two minutes in length, we find JPEGMAFIA still releasing track after track, as he has always done, to much acclaim from fans and critics alike. His unapologetic and frankly hilarious lyrical style is still at the forefront, with stellar production to back it up. The song is unconventional, as is most of Peggy’s output, but is also way less abrasive than the more industrial and abstract tracks that feature on his last album, All My Heroes Are Cornballs. The song is straight braggadocio, with the rapper describing how everything is ‘kosher’ and how great he is looking right now – maybe in relation to the artist’s substantial success as of late. However, given Peggy’s love for subversion, it’s easy to cast a lens of irony over the song, especially knowing the content of the artist’s past work. But in a welcome change of pace, his usual existential outlook is vaguer this time around, and it’s great to see that it does not inhibit his integrity or the individuality present in his work.

Bringing noisy reverb to the tracklist for this week is Pond, who have released a short EP named Human Touch, a taster for their aptly named ninth record, 9. The titular single of the record is one that sounds somewhat thin, but adds a punk edge that keeps listeners engaged. The electro-rock tinged track is a slight departure from the norm, which is usually more spacy and effects driven. That is not to say that this song doesn't showcase a heavy amount of reverb, distortion and fuzz, though the main focus of the track seems to be the immediacy of it, proudly showing off a more raw side. The guitar is incredibly prevalent in the mix, leaving a little to be desired from the bass and drums, but overall the track is a nice energetic injection that drops you right into the action of Human Touch. 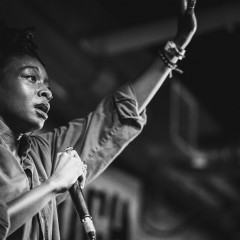 Back again with this week's newest releases, have you had a listen? Let us know what you think!