‘Tactical Espionage Operations’ is what Metal Gear Solid V: The Phantom Pain aims to provide – and it does so in spades. In this Voice Retrospects, I take a look back at Hideo Kojima’s final entry into the iconic Metal Gear series!

The Metal Gear series has long held a soft spot in my heart. Created by Hideo Kojima and published by Konami, the series pioneered the stealth video game genre, and is renowned for its intricate (though admittedly convoluted) plotline, cinematic cutscenes and comprehensive stealth gameplay mechanics. I played through the numerous titles when I was younger, even going so far as to purchase a PlayStation Portable just to play Metal Gear Solid: Portable Ops! Released in 2015 before Kojima’s departure from Konami, Metal Gear Solid V: The Phantom Pain represents the zenith of the Metal Gear series and received universal acclaim from critics.

Players take control of a legendary soldier known as Venom Snake, who awakens in 1984 after a nine-year coma to pursue the villainous Skull Face, who was responsible for an attack that resulted in Snake’s comatose state. While doing so, players must recruit enemy soldiers to form and strengthen the mercenary group ‘Diamond Dogs’. At its core, this constitutes the main plotline thread of the game, though there are several obstacles and twists and turns along the way.

Metal Gear Solid V is a deeply cinematic game, and every cutscene is visually impressive. Each one feels like it would belong in a Hollywood blockbuster, forcing players through a gamut of emotions over the course of their playthrough. This may be discouraging for some, as the cutscenes can occasionally be fairly lengthy, though further details about the storyline and in-game world can be found in cassette tapes received throughout the game.

The gameplay is where Metal Gear Solid V really shines, as players are free to adopt whatever approach they deem fit in each of the main missions and side operations. Want to silently infiltrate a base or outpost at night and leave without a trace or alerting any enemies? You can do that! Want to blast in headfirst and eliminate anyone you come across? You can do that too!

The onus is placed on the player to choose how they want to complete the game, and investments can be made into weapons and equipment to best facilitate this. Enemies will also react to the tactics that Snake utilises. For example, if you frequently make use of headshots to neutralise enemies, they will begin to wear helmets that make it harder to target the head. If you consistently complete missions at night, enemies will begin to wear night-vision goggles that will enable them to better detect you as you move around the in-game environments.

All in all, Metal Gear Solid V: The Phantom Pain delivers an immaculate gameplay experience blended with a robust narrative that coalesce together to serve as an electrifying finale to the Metal Gear series. 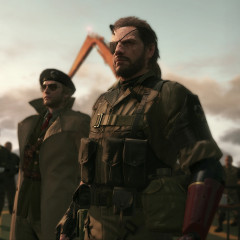 ‘Tactical Espionage Operations’ is what Metal Gear Solid V: The Phantom Pain aims to provide – and it does so in spades. In this Voice Retrospects, I take a look back at Hideo Kojima’s final entry into the iconic Metal Gear series!