It has been a month since International Women's Day, but does the celebratory date really serve a purpose when it's so easily overshadowed by individual stories?

It is not uncommon for a commemoration holiday to come and go and for the issue to soon be forgotten. But this year, IWD was only the beginning. Indeed, the whole week proceeding the celebratory day seems to have been focussed on women’s rights. So was the holiday pivotal in sparking the flame of indignance, or did that past week proved the futility of commemoration holidays?

We have witnessed questions of mental health, harassment, police brutality, and social media activism raised and deliberated. Meghan Markle revealed her history of suicidal thoughts only to be probed and doubted, dividing the country into those sympathetic and those disbelieving. A vigil for Sarah Everard was held in Clapham Common and broken up aggressively by the police. And so, ever since, questions about building safer spaces for women, both on the streets and in the media, have been passed between the tongues of the country. Experiences have been shared, but few solutions have been provided.

However, it is nonetheless clear that the events of that week have stirred up contention. They have raised awareness. They have stimulated action. And that is the exact same purpose of International Women’s Day.

On one hand, you could argue that IWD on Monday laid the groundworks for mass indignation at the week’s subsequent events. Without global attention being raised for women’s rights on Monday, there might not have been such outrage at Meghan Markle’s treatment nor Sarah Everard’s disappearance. Indeed, the contradictory nature of the week’s events to the spirit of IWD highlighted the still-current prevalence of such injustices. Perhaps it was the combination of the holiday with recent events which sparked such media attention.

On the other hand, you might say that IWD paled in comparison to the stories of individual women. Although we saw some awareness of the commemoration holiday, IWD hit headlines far less than Meghan Markle and Sarah Everard did. Instead, it took the narratives of these two figures to stir people to action. Perhaps this means that there is little point to holidays such as IWD, especially when they do so little compared to news-worthy headlines.

So what allowed people stand up and shout? In my mind, it’s social media. When women heard other women’s stories in the news, they related to them – they were encouraged to tell their own stories because of them. And thanks to platforms such as Instagram and even TikTok, these stories too become heard by the masses. We are stirred by narratives, not by global commemorations.

So is there any point in continuing IWD when it’s been proven comparatively futile? Of course there is. Even if only a small amount of good comes from such a day, any awareness is beneficial awareness. But what we really need to be focussing on is telling the stories of individuals, sharing the experiences of the many.

After all, it is the unheard voices of yesterday which will help create the activists of tomorrow. 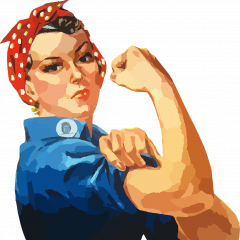 How effective are commemoration holidays?

It has been a month since International Women's Day, but does the celebratory date really serve a purpose when it's so easily overshadowed by individual stories?