Just days after International Women’s Day, #notallmen has been trending on every platform as a defence that not all men are violent perpetrators. Which is true; however, too many men switch off when they see the narrative ‘men are dangerous’ because they think, ‘well, I’m not dangerous, so this doesn’t apply to me’.

But if you were to open up a conversation about sexual harassment with any woman in your life, you might be shocked to hear some of the responses. The truly horrifying answer comes not from the question ‘have you ever been sexually harassed?’ (which, by the way, as reported by the UN a horrifying 97% of women have been), but rather, ‘how old were you when you were first sexually harassed?’. For most, it’s school age.

A group of schoolgirls have even been campaigning to make street harassment illegal with the grassroots organisation, Our Streets Now.

Their report found that “72% of pupils who did report public sexual harassment described receiving a negative response from their school, with the majority of participants stating that no real action was taken, while a further 47% didn’t report incidents because they were afraid of not being believed or taken seriously.”

They also interviewed Anya, a 14-year-old student who revealed, “Since I was 11 years old, I have avoided walking home alone from the bus stop, especially when coming home from school in my uniform.”

When people typically think of sexual harassment, I can’t imagine many consider the amount of children who actively need to take such precautions to ensure their safety.

But as a woman, you’re taught to be wary from a young age. You’re told not to walk alone in the dark, but if you absolutely must, you’re told to cover up and dress in bright colours, ring somebody you know, keep to the main road (and more brightly lit streets), don’t be out after midnight.

Sadly, Sarah Everard did all of those things, and she’s a name only known due to her violent and tragic death.

That is terrifying for women everywhere. Even if you do follow the unspoken ‘safety rules’, it simply isn’t enough. Every woman you know has had to look behind her in fright while walking alone late at night and imagine a scenario where they might need to respond to somebody attacking her.

Actress Jennifer Kirby summed it up well, “The problem with telling us that most men aren’t dangerous, and don’t mean us harm, is that, while that’s true, we have no way of telling which ones do mean us harm. And it only takes one. Meaning it falls upon us to be on the lookout, every day, all the time.”

What makes the situation more difficult is men being offended at the notion that a woman might be cautious of him — for example, wanting to meet for the first time in a public place, texting her friends/family to let them know where she is etc. These precautions often result in guys blowing up with defensive anger and being personally offended that a woman might think him capable of such things. Even if it’s ‘just’ passive-aggressive or annoyance, it is intimidating when a woman is simply trying to be safe. Such behaviour is oppressive and can even frighten women into being more ‘agreeable’ and, consequently, can put them at far more risk so as not to cause a problem.

However, it’s not remotely personal or even an attack for being male. It’s about our safety. 97% of women don’t ever want to feel that way again, and the other 3% are cautious of it happening to them.

The statistics are just too high. The personal experiences are too many. Women should be equally able to live free from fear of assault or harm from those who target them simply for who they are.

#Notallmen, but here is what you can do to support women, with actions and not just a  hashtag.

Fawcett Society is currently campaigning to make misogyny a hate crime. The Law Commission found in 2018 there were 67,000 incidents of hate crime based on sex - 57,000 of which were targeted at women. You can send off a pre-written letter to your local MP to help raise this issue in parliament by clicking here.

You can read a more in-depth article on Voice about the 97% of women study here. 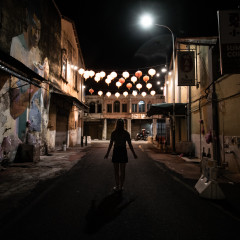