In our post-pandemic world, we need to support the people around us.

With hundreds of thousands of deaths, this pandemic has irrefutably been a time of tragedy. But, there have also been flashes of brightness within the dark. When pushed to the brink, instead of descending into a Walking Dead-esque apocalyptic state, people have shown a sense of solidarity and community which in some spaces hasn’t been felt for a while. We see this solidarity in so many places, with efforts ranging from mutual aid groups, petitions, donations, to protests.

My hope is that this Covid community energy carries through into our new normal.

In our personal lives, there’s clearly an increased focus on community. Many people have formed (and joined) mutual aid groups. We’ve been talking to and engaging with our neighbours and local communities more than we’ve seen in decades. Even the clapping for carers, whilst veering on performativity at points, has still been a massive show of unity.

There’s also a greater general awareness of how the people around us are living – or struggling to live. So why not mobilise that knowledge into improving the future? The problem of elderly people being lonely won’t end when the pandemic ‘ends’ and neither will food deserts, or child poverty. If anything, these issues are set to worsen, so we will need this community even more to fill the gaps and help the people that the government can’t/won’t support. So I hope this personal awareness and sense of community can continue long beyond the end of Covid-19.

I further hope that our increased sense of community extends to the arts. This sector, particularly theatre and live music, has been massively impacted by the pandemic and the government response has been pretty lackluster. But change often comes at the most difficult of times, and as terrible as the industry struggles are, I feel they present the perfect space and cover to enact some of the changes many have been talking about for years.

Yes, we could return to the safe, the multiple grand Shakespeare performances led by the same few knighted British actors, and clap for joy at the never-ending revivals of the same five musicals. We could run back to a norm where the only ‘affordable’ seats are £50, behind a pillar and require you to have binoculars to see the action. But do we want to? Isn’t that a wasted opportunity?

We could – indeed should – push for something new. We should create an arts sector which actually reflects and connects to communities using local and non-traditional spaces. As budgets shrink, we should produce art in smaller ways, funding local talent whose art is representative of where they’re from and how they live their lives.  The arts shouldn’t primarily exist in these big, sequestered and revered institutions, which only the privileged few have access to. When the dust settles and we create this new normal, I hope our understanding and implementation of the arts can be more communal.

I also hope that this sense of community transfers to the political sphere. There’s a degree to which this is already happening – the global reinvigoration of the Black Lives Matter movement and greater recognition of the conditions of the struggles of Black people globally shows that we can make moves of solidarity. We need to make sure that energy continues to coalesce and is directed at those with the power to make change. We can push politicians to make changes which actually improve the lives of other people. And if they won’t? Then we take that communal spirit to vote for candidates on a local and national level that will.

This doesn’t have to be a single moment in time either. It can be pushed to be consistent and powerful both in and outside of the ballot box. Our democracy allows us to write to MPs, call them, and make our voices heard. Shouldn’t we exercise those freedoms?

I don’t believe there’s an automatic moral arc of the universe. There’s no guarantee that things will get better or won’t end in more tragedy. However, this moment does create possibility, a chance for us to change things – but we have to seize it and never let go. With the dark times we live in and the potentially dark times ahead, we need each other more than ever and I hope our New Normal embraces that. 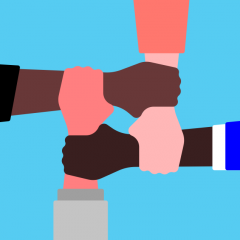 In our post-pandemic world, we need to support the people around us.