Coronavirus has already created a ‘New Normal’. Is it one we want to change?

We have all gone through the unique joy that is getting accustomed to Lockdown. I say this like it's something crossed off a list, but I'm aware that for many this will be an ongoing state of adjustment.

So, what is normal right now? I, like many other lucky few across the world right now, am benefitting from the last Furlough payments granted by the government to replace money I'd normally be earning from work. In a situation I never thought I'd see, I seem to be being paid to exist! Happy days.

My new normal is getting up to conduct general life admin (feeding the beasts, washing dishes/clothes, making myself/the house vaguely presentable/sanitary). In between, I'm ploughing through the stack of books that has been staring back at me judgmentally for a series of years. I finished one in two days this week – that's a record for me.

After that, I might ring somebody to make sure they're alive and I haven't forgotten a vital birthday (my memory is awful). I break for lunch, which consists of a disproportionate amount of fried eggs and mushroom sandwiches of late… just because I can! This tends to come with some TV – currently I'm working my way through 'Killing Eve'.

After that is my daily wander. I mentioned in another article how I've been Biorecording, taking pictures of plants and animals and sending them to experts to look knowledgeably at. I've more or less covered all the plants within a half-hour radius, so I've started on insects. The rain has put things off for a little while (you get this horrendous bug soup if you try a sweep-net in wet grass! ) .

So, now I'm spending my hour litter-picking all the green bits. I've discovered I'm incredibly lucky – I live next to a fishing pond, an old quarry that's been turned over to nature, a community woodland and a countryside footpath. I go out there probably more for my own sanity than for anything a personal trainer would call exercise, but hey ho.

After that, it's more reading until I cook (tonight it's burgers and chips, btw) followed by more reading and probably a film.

I also have ongoing bigger projects. I'm lucky enough to have a garden, but it's only titchy. So, to maximise space, everything is grown vertically. I have potatoes in a dirt-filled tower made of old tyres, a cold-frame with tomatoes in and peas growing in every conceivable direction. I'm also trying to establish a meadow along one side of the lawn, which is tricky, because the cat unhelpfully keeps trying to dig everything up again…

At this stage, I'm pretty much just waiting for stuff to grow, so I've got a new project. I'm working on making a human-powered electric generator, and I've finally (I think) got all the parts I need for it. More on that to follow…

That is my system. It's broken up once a week with an update from work confirming the existence of my job and a shopping trip every 2 weeks into 'The Great White Void' (otherwise known as the outside world).

Not everyone is so lucky, of course. Many of our key workers are braving exposure on a daily basis, often in jobs with inadequate PPE, regardless of their own vulnerable dependents. With restrictions easing, the bracket for what work is considered 'safe' is expanding, causing more to be exposed to risk that has been avoidable up until now. That said, a great portion of these will not have had the luxury of furlough, so this will be a welcome opportunity to earn some cash, however risky.

We can expect a second spike of infections, but at some stage our world will have to invent a new normal way of doing things. So the question is, what do we want it to look like?

We can expect Covid-19 to be a recurring issue, part of our seasonal attacks of Flu and Cold. We can also expect similar levels of population immunity, though this may take some time to establish itself.

However, in all likelihood our planet will experience an increasing array of novel viruses as our populations expand ever greater. We can certainly take lessons from the leadership of sensible, pragmatic countries like New Zealand, who've had the sense to tackle the disease swiftly to save the maximum amount of human life.

That said, what about you and me? My neighbourhood seems to have been full of what I've affectionately termed 'Corona Parties' since day one of lockdown; families of elderly couples determined to play pass-the-parcel with as many dribbling infants as possible, or weekends of suspiciously full car-parks so people can have meaningful time to sneeze all over each other. So, I continue to do my bit, but I don't hold much hope for the future plague victims of Shropshire.

Good habits for a better future

On a positive note, the planet has had one hell of a breather. Worldwide, city streets are cleaner than ever. There are parts of India that haven't had views of the Himalayas for 30 years due to industrial pollution now enjoying clear, blue skies.

The amount of carbon saved by people working from home is huge. China, one our most industrialised countries, has seen emission reductions of 100 million metric tonnes in a space of two weeks as a result of the viral outbreak. Though nature has forced our hand somewhat, it has given us a glimpse of what we can capably achieve (pretty quickly, too) with the right willpower.

Many have reported the benefits to the natural world too, with our reduced presence (be it traffic or footfall) emboldening our wildlife to colonise new habitat opportunities and plants allowed to flourish where they might otherwise normally be tightly controlled.

Our technical prowess is being given a firm kick up the keister too, driving forward communication technology that has been languishing uselessly for years. From this crisis, we can expect more industries to install home-working protocols as a matter of course, with home-working becoming more normalised.

Technology, carbon reduction and nature recovery aside, this has also been a huge opportunity for humanity to show off its good side. The amount of public support for our health services and key workers (particularly where this materialises as PPE or monetary support) has been heartening at a point in history where we're used to hearing the worst about ourselves.

Entertainers have gone to great lengths to keep people vaguely on the right side of social distancing (as well as occupied and sane!).

The multitude of local support groups that have blossomed to keep our vulnerable people cared for and fed has seen a resurgence in community spirit, which has been a subject of much tutting and muttering for decades. In addition, being held in close quarters has promoted more uptake of environmental responsibility.Historically, it has taken war to ignite such warm fuzzy feelings.

This outbreak doesn't have to be the harbinger of doom it seems right now. Meaningful step-change comes from significant events, think of airport security after the September 11th bombings. We will come out of this stronger, wiser and better prepared. 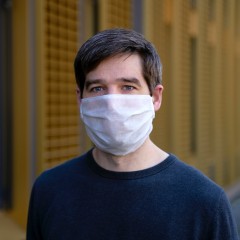 Despite its horrors, society could benefit from Covid-19

Coronavirus has already created a ‘New Normal’. Is it one we want to change?