If you haven’t heard of Alexandria Ocasio-Cortez (AOC) then let me give you an introduction to the best person you’ll meet in 2020:

She was born in the Bronx to Puerto Rican parents, and excelled in science resulting in her having an asteroid named after her (a premonition of her ‘meteoric’ rise in politics, perhaps?). She studied International Relations and economics, and then after her father's death became a waitress and bartender to help support her mother and save her house from foreclosure. She was still working this job when she ran for office in 2018, taking on Joe Crowley, the Demoractic Chair (read: very important Democrat within the party), the first Democrat to challenge him for the role since 2004. And she won, becoming the youngest woman ever to enter congress.

I know right? So on with the letter.

You don’t mind if I call you that, do you? I can pronounce it I promise, although I do think a compilation video of all the old white male newsreaders attempting to say your full name, failing, and interrupting themselves with AOC needs to happen.

You are an absolute beacon of hope at a time of political darkness. You care about real people and real issues, because you have and continue to live them every day. When you make policies about zero-hour contracts and minimum wages you can do it having actually been there, working in the soul-sucking hospitality and retail industries. You stand up for what you believe (a trait I always admire), and what you believe in is the stuff that is really important to everyday people.

Your Green New Deal? Incredible! Between a target of America creating net-zero carbon emissions by 2030, phasing out fossil fuels and creating a sustainable farming industry it is just the breath of fresh air politics – and the environment – needed. It is ambitious, decisive and no Republican senators have voiced support for it – all reasons it is a fantastic idea.

One of the videos that first got me interested in you and your political lobbying was when you talked to Mark Zuckerbug in Congress, or more accurately, ‘decimated’ him. Grilling him on his knowledge about the Cambridge Analytica scandal, hauling him over the coals about Facebook’s spreading of false news and oh boy it was a real show, as you stayed cool and calm whilst he visibly sweated and his voice just trailed off. When you saw him providing misinformation and obfuscating you TOOK. HIM. DOWN. and it was as awe-inspiring and brutal to watch as a lioness taking down a gazelle.

If I wrote about all the issues you stand up for that have a special place in my heart, it’s safe to say we would be here for a long time. Women’s rights, the right to healthcare, the rights of people of colour, the right to privacy, action on climate change, calling out those who cause harm to others, the list goes on. Thank you for being one of the only things in politics right now that give me hope! 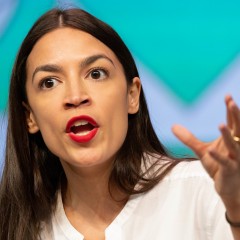