2020 is a very special year for those of us who admire Beethoven, it's his 250th birthday anniversary!. As part of a global celebration, musicians will gather together to honor this amazing composer.

Beethoven was born on December 1770 in Bonn, Germany. At the early age of 7 years old, he performed in public for the first time playing the piano, which took him from smaller performances to becoming the court’s second organist when he was only 14 years old. At the same time, he started working on his own improvisations -the earliest piece recorded from his work dates from the year 1782.

An interesting fact is that some say that in 1786, Beethoven traveled to Vienna to receive composition lessons from Mozart and lived there until April 1787. Although there is no documentation of this encounter, Mozart did say about Ludwig: “watch this young man; he will yet make a noise in the world”.

Being a musician and losing his hearing

After his parents’ death, young Ludwig was responsible of taking care of his younger siblings. During this time, he was asked to compose two cantatas but failed to deliver them on time. Still, this was a kickstart to get over the “composer’s block” he was going through and started working very hard.

By the time he was 20, he was already one of the most important musicians since Mozart, had studied with Haydn and was considered a virtuoso pianist.

Gradually, he started noticing a buzzing sound in his ears, and his hearing got weaker every time. Around 1880, when he was on his 30’s, he wrote to a friend that at the theater he had to get really close to the orchestra and the singers to be able to hear them. Frightened of telling people he was going deaf, he avoided many social gatherings for several years.

As time went by, Beethoven was still able to hear some sounds and music until 1812. By the age of 44, he had gone almost completely deaf.

The causes of his deafness are unknown, but theories go from an illness to the fact that in many occasions, he would put his head under cold water to keep himself awake or against the piano strings while playing.

After a life full of music and struggling with his deafness and multiple hepatic affections, Beethoven died on march 27th, 1827 at the age of 56 years old.

Then, how did he managed to compose having losing his hearing, and why do we admire him?

During his early works, Beethoven was able to hear all sounds frequencies and knew exactly how instruments and voices sounded. One of the reasons for musicians to admire Beethoven, it’s because his musical inner ear was so trained that after going deaf, he could imagine how everything he would write was going to sound.

This year is very important for musicians and musical assosiations as well, there are going to be concerts in honor to Beethoven across the globe! Keep an eye on the orchestras and choirs near you, and if you are part of one of them, spread the word! 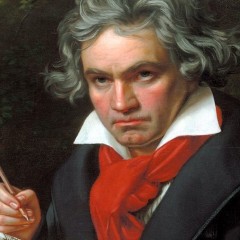 2020 is a very special year for those of us who admire Beethoven, it's his 250th birthday anniversary!. As part of a global celebration, musicians will gather together to honor this amazing composer.