An honest account of one guy's journey from Cheese Addict to Angry Vegan.

I never sought out to do Veganuary. You could say it found me.

I was wandering around town, keeping myself to myself, when I happened across ‘Anonymous For The Voiceless’. If you’re not familiar, they’re affiliated with the infamous hacktivist group Anonymous, but focus on animal rights rather than the more general political injustices. A favourite feature of theirs is the ‘cube of truth’, which is not what it sounds like (‘Naked Attraction’ in a shower cubicle), but rather four people holding TV screens running footage of animal rights abuses on a loop. I should say at this point, you are warned by multiple signs and attendants before seeing them, you don’t get the chance to be accidentally traumatised.

And the footage certainly was traumatising, although the people holding the screens – dressed all in black bar a Guy Fawkes mask – were much more intimidating. Their sensibly, defensively clad faces shall forever haunt my dreams.

I rather liked the honesty of it, and felt compelled not to be another grey blob moving through the street. It’s weird to think that talking to a stranger can seem like a noble act these days. Not that I wasn't being entirely noble...I'd be lying if I said I didn't feel compelled to talk to them in the effort to impress my partner, who happens to be vegan. I was ensnared in a trap made for me, backed into a corner by logic. I could either publicly embarrass my partner, or agree to sign on to a month of zero beastly ingestion.

The prospect of trying Veganuary wasn’t completely foreign to me. I had been thinking about trying Veganuary for a while, I was just waiting for a time when I felt I could actually feed myself without dying. More specifically, I was waiting until I thought I could wean myself off of my true beloved: cheese.

I didn’t expect it to be easy, but avoiding cheese for a whole month after Christmas was probably a good idea. That said, my fridge remained utterly rammed with cheese following the Christmas indulgence. These would have tortured me, had I not been house-sitting somewhere else all January. That probably counts as cheating, but I did also ask my partner to hide the milk chocolate in case I got weak. I still have no idea where it is…

So, at this point you’re probably wondering, did I waste away, desperately grasping for iron deficiency tablets? Did I long for the sweet, umami relief of bacon? Did I triple my muscle mass and reduce my recovery time by 2 days?

Going in I always knew meat wasn’t going to be an issue, I barely ate the stuff before. It’s a meal out once a month, if that. Eggs were slightly more challenging, but unless I’m making an omelette or craving a fried egg, a spoon of flax (it’s next to the intimidating-looking protein pills) does the trick.

But cheese. That would be a different story.

I knew I had to prepare. So, in December I undertook some fake cheese research to find the one I could depend upon to replace cheddar. I have cheese and Marmite sandwiches EVERY DAY, so I needed a fake cheese I wouldn’t find annoying after a while. I was pointed to a fake Chilli cheese, and it’s become my favourite for crackers, but if I had that in my sandwiches everyday my mouth would melt and fall off.

I settled for ‘Violife Greek White Block’, which sounds suspiciously like part of a builder’s quote, but is a dead-ringer for goat’s cheese. It has a strong enough flavour to counteract my need for the real stuff.

I was warned that the first two or three weeks were the hardest, as these were when my body would be in “withdrawal” from “cheese addiction”. I don’t find this funny, I am definitely addicted to cheese. Cheese makes me happy. I accept this.

I have (reluctantly) gone without it before. For example, I was once in tropical Peru where cheese was not only illegal to import but would have gone rank almost immediately. And while still tempted to try, it would also have resulted in a horde of rampaging creatures descending to turf my bag out. The effect of being cheese-deprived was immediate. By the 2nd week I had written lists of all the beautiful things I wanted to do with cheese, I spent days on this.

Still, with my decent fake cheese and an ability to think creatively about my food, I was armed. Not only that, I’d been practicing cooking vegan for the last two years to encourage my partner to not run away when I got hungry.

Surprisingly non-dramatic. It’s just food. The only thing I did different to my normal cooking was to change odd ingredients for substitutes.

The only exceptions were dishes that were predominantly cheese-based. While things like a cheese sauce or a sprinkle on top of a meal were easy to swap out for fake cheese or ‘nootch’ (veggie slang for nutritional yeast), anything that made me drool from its cheesiness was a lost cause. Pizza remains a red line in the sand for me.

As I said above, there were no life altering changes noticed. I have not become a body-builder overnight, and my recovery time (the time needed to recover between exercise) has not changed. But, I have lost some weight.

I initially assumed I’d need the same quantity of fake cheese as the regular stuff, but gradually found that I was actually buying way too much. My general food intake seemed to go down over time.

This last week has been a lot tougher. Despite everything I’ve heard, the final stretch has been the hardest, not the easiest.

One aspect I was not expecting was the antagonistic reactions that seem to crop up as a result of flaunting beast-free food in a public space. I had some nice conversations about swapping out milk and butter for plant-based stuff, but it never felt possible to simply eat your food and relax. You have to stay on edge at all times just in case you’re ambushed with questions or comments.

In my office, the strongest argument for rearing livestock is conservation grazing, and I have to agree that it probably cannot exist without the cows going to market to pay for their upkeep. That said, who is eating conservation grazed beef? It’s not that I don’t care about these things, I really do, but I fail to see how the act of eating a sandwich is considered a call for debate on the ethics of food. I might as well have shouted ‘come at me, you carnivorous ba**ards!’, spitting chunks of fake cheese everywhere, flinging lentils in my wake.

I’ve learned that it’s not easy being vegan, but the hardest challenges have less to do with food than people. To remain calm and reasonable in the face of blistering attack is something my partner has a singular talent for, whereas in one short month I have become an angry vegan.

So, have I seen the light? Has my soul been wrenched from the meaty grease-fires of hell? I'm afraid not. I am still afflicted with cheese addiction, but I now restrict it to once a week (unless its pizza, obviously). Weirdly, I now find milk chocolate intolerable, which is probably a mixed blessing. But I'm torn between feeling relieved about finding giving up chocolate easy, and betrayed because my life was all a lie! CURSE YOU VEGANISM! 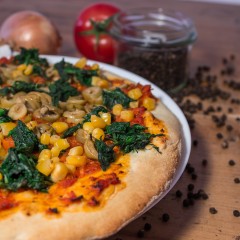 An honest account of one guy's journey from Cheese Addict to Angry Vegan. 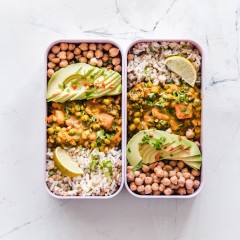