Julio Cortázar, jazz and literature. How do they relate?

Before I begin explaining the title of this article, I'd like to tell you a bit about Julio Cortázar.

He was born in Brussels, Belgium on August 26th, 1914, from Argentinian parents. The war caused the Cortázar family to move across Europe in many opportunities, to finally cross the ocean and settle in Banfield, Buenos Aires, Argentina.

Julio Cortázar would become one of the icons of the Latin American Boom and the surrealist literature in Argentina, and one of the country's most famous -and beloved writers.

PLAYING WITH THE WORDS

As soon as you start reading a Cortázar book, you feel surrounded by a surreal atmosphere, suddenly you're in the world he made out of words. It's an amazingly strange feeling. Also, you're very likely to fall in love with the characters, cry or smile with them and even explore their subconscious.

One of his most famous novels, Rayuela (Hopscotch), it's a mix of all this. It begins in Paris (where Cortázar lived untill his dead in 1982), where a group of friends from different countries gather together in the Latin Quarter to listen to some jazz, classical music, talk about philosophy, books, and drink vodka. You'll be following Horacio Oliveira's thoughts (he's a man from Buenos Aires on his mid-40s), the merry-go-round of his mind and the way he fell in love with La Maga (a troubled woman from Montevideo, Uruguay).

But quite possibly, the thing that most interests people about this novel is the way it's written. Hopscotch is a book, but it's also two books at the same time. The first one, you can read it from chapter 1 to 56. To read the second one, you have to follow the directions left at the beginning of the book. Julio Cortázar intended to make a game out of his novel, making the reader get involved with the story, playing with it! But this did not only happened with Hopscotch. After this novel, Cortázar wrote 62/Modelo para armar (62/A model kit). This novel has no chapter numbers, so you choose the order! The idea of this novel, begins on Hopscotch's 62nd chapter, and the stories can take place in London, Paris and Buenos Aires at the same time.

There are also short stories that show how Cortázar reinvented the world of words and proved how you can do literally anything with them. The best example is Clone. This is a short story about a choir and the passions inside the group: there's anger, love, fear, and many other emotions. The amazing thing about this short story is that each character represents an instrument from Bach's Musical Offering. You can actually read the music without using a music score, and find out that the personality of the characters fit the instrument they're symbolizing.

Now's time to tell you all about the title of this article. Cortázar was a huge fan of jazz -and music in general. He played the trumpet and was fascinated by the compositions of Charlie Parker, Miles Davis, Thelonius Monk and many others. But is on his written work where you can see the actual influence of jazz on his literary life.

As in jazz, there are parts of his novels and stories where the dialogue or the thoughts of a character are unresolved (like composers do with their music). Also, you can perceive the tonal variations in every event of the stories, and feel that jazzy beat. In many opportunities, he explained how inspiring was for him to write while listening to jazz -he even said that some parts of Hopscotch were written based on jazz improvisation, and compared the act of writing with swing music.

For all this and the reasons that make Cortázar an incredible writer, is why I invite everyone who reads this article, to step into his world and let go with the music, the art and the words. 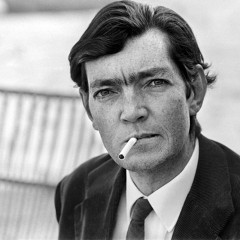 Julio Cortázar, jazz and literature. How do they relate?