Music writer Sophie gives us the run down of her most memorable live show experience!

With all the madness of Edinburgh Fringe underway, our editor text me a few days ago with the question ‘What was the best live show you’ve ever seen?’ and I had to have a good old think. For the first time in a while I was a bit stumped for an answer, after all when I’m not writing on here, I spend most of my time photographing shows that are all, on a technical level, outstanding.

Then the more I thought about every show I’ve been at, followed by a quick filtering down I was left with: Green Day’s concert at The O2 in February 2017, Good Charlotte’s gig at the Manchester Ritz or when I saw 5 Seconds of Summer play Wembley Arena in 2015.

These bands are all so different in all their wonderful ways and were all individually such different concerts too. Green Day’s set was by a mile the best I’ve ever seen, I saw Good Charlotte in a tiny venue with two of my closest friends on results day partying away and 5SOS at Wembley was the first ever concert I’d been to.

Now, for all of you who might not be aware, I’m a person who likes a good story that comes full circle at the end. So...here I am in black and white...saying the most memorable live show I’ve ever seen was a 5SOS show when I was fifteen. Note: This was a sentence that when I first started writing about music I didn’t ever think I’d write but here we are.

Most people always seem to idolise their first concert experience and it sticks with them for the rest of their lives, regardless of who was actually on stage, or how good the music was. Unless you saw the Tweenies LIVE aged three and remember nothing except going to and from The Royal Albert Hall (I’m still unsure if the whole experience was just a scary acid trip or not mind you).

Thus begins a tale of a fifteen year old who went into school with every intention of skipping homework club (like the good student I was) to go on a six month anniversary dinner with her boyfriend, who ended up going to a concert and falling out of love with that same guy and in love with live music instead.

Occasionally, I remember the phone call I made to my mum the minute my friend said she had a spare ticket, asking (more like pleading) if I could go and not only ditch the date she didn’t know about but an important swim practice session too (thus fulfilling every ‘rebellious teen’ trope going). On even fewer occasions I apologise to her for the ear deafening screech she must have heard down the phone at 8am that day.

After a quick ‘Sorry can we rain-check on tonight, there’s been a family emergency and my grandad is in hospital’ text to my then boyfriend (he wasn’t in the hospital at all) I was met with a simple ‘Ok, I hope he’s alright x’ about five minutes later. I was good to go, and to be quite frank, nothing else mattered for the rest of the day.

As I hastily applied bad makeup in the space of ten minutes in a crowded school bathroom, my date outfit became my concert outfit. Blue jeans, a white tee, navy bomber jacket and brown chelsea boots were a far cry from the black skinny jeans and flannels the band and their fans wore back in the day. However, fifteen year old me didn’t care at all and walked down the steps at Wembley Park tube station ready for the best night of her life.

Most of the concert would’ve been a complete blur, had the whole affair not been recorded live for a DVD documentary. However, what I remember when I think about the whole night, is just how incredible a concert can be. I fell in love with the idea of putting a band on stage in a room while everyone else had an awesome time and I haven’t fallen out of love that idea yet. (I hope I never do either or my job would get pretty horrific pretty quickly).

Just when you thought this tale couldn’t get any more poetic enough, I now live next door to the very same arena and see it every morning when I wake up or get home from a night shooting gigs. Every morning I get to wake up and think about how much I changed the course of my life from that one concert, which eventually led me to ditch applications to study Veterinary Medicine at university a few years down the line. Furthermore, a few more years down the line it would lead to me working in the biggest recording studios in Europe.

I don’t often congratulate myself for decisions I took so young but the choice to go see 5SOS perform that night was probably up there with some of the best decisions I’ve ever made. It’s a decision that has led me to bettering myself and working in a job that is one of the best jobs in the world. (...well I think it is and I’m the one writing this so if you disagree...maybe stop reading now?)

And if these words aren’t enough to convince you, please enjoy this snippet of a video I had to dredge up from Facebook Messenger from over four years ago. If this can’t prove to you that this was the best night of my life then I quite frankly don’t know what will. (Seriously, no one needs to know how long it took to find this). 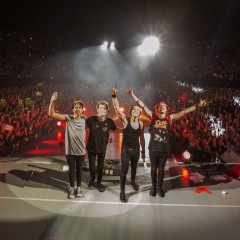 Music writer Sophie gives us the run down of her most memorable live show experience!