This second blog instalment comes to you from a teal blue portacabin-box-office outside venue 13, at this year's Edinburgh Festival Fringe.

Our team arrived in Edinburgh over 2 weeks ago now and after 5 days spent building a venue and running various tech and dress rehearsals we turned a renovated church hall into a theatre and opened 8 shows to the many festival goers that swarm into Edinburgh throughout August.

Half way through and it's been manic. Manic but loads of fun.

After a long journey up from Cardiff last Sunday, we started a series of long days rigging lights, projectors and speakers, coving the hall's walls with black tabs, building a stage and a seating bank and generally transforming the space. I spent the morning of the first day down in the pit of the venue, trying to make some room to store our show's set and props, and passing up stuff that we store at the hall all year round and pull out each year just for the festival.

The venue that had taken us around 5 days to construct in Cardiff, was pulled together in just two slightly longer ones, evidence that the initial building (and all the labelling) was worthwhile.

Technical rehearsals hit and things began to get tough. There were naturally a few surprises as it's hard to communicate an entire show over email, but by running some extra cabling, rigging some lanterns for special lights, and projectors for individual shows we managed to facilitate all the incoming company's requirements. Each show had just a few hours for their technical rehearsal and lot of them didn't finish a full tech run and had to carry this over into their dress run later in the week. These technical rehearsals were used to plot lighting, programme and check levels on sound, programme and map AV. As many of the shows have hanging set pieces, we also had to place these and mark their positions with different coloured tape because they would have to be put up and taken down everyday for each show.

One of the most challenging things, although this was more prominent in dress rehearsals, was the changeovers between shows. Each show runs for approximately an hour and we then have 15 minutes to get that show out and 15 minutes to get the next show in, with only a team of 4 (plus whatever help we can gather from the companies whose shows we are going from/into). One of our busiest changeovers involved going from a show set in a television studio with some furniture, 4 large, awkward, flats, and a live feed camera, into a show with 3 (very fragile) hanging cloths, 4 pendant lights, a bath, dance floor, 1 additional rear projector and 2 carousel projectors, all of which had to be focus for each show. The first day we had to open 10 minutes late, now we're finishing the changeover with 10 minutes to spare: practice makes perfect.

Things have gone wrong yes, just two days ago we had a problem with AV and one of our projectors not working. And when things like that happen the hardest part is finding time to fix them as you're going from show to show, back to back, all day everyday. But the show must go on. We managed to get things working enough so that each of the three shows that needed AV that afternoon were able to have it, although perhaps not quite as they normally would. For example, for one show which is very AV heavy that simply wouldn't work without the afore mentioned projector functioning, we made it so that the AV could work if we used a shorter cable run, so it had to be controlled from the front of the audience rather than the control position at the back of the venue. A temporary, not ideal, solution but it meant we didn't have to cancel the show (as was briefly feared!). It wouldn't be live performance if a cable didn't occasionally fail now would it!? And there is a great satisfaction once you've trouble-shot and solved the problem.

So, now as we reach the mid-point of the Fringe, the reviews are rolling in, with a number of our venues shows getting 3, 4 and 5* reviews that we're plastering all over their posters with pride. We've also had a few mentions about being "wonderfully intimate" and a "charming wee theatre" which is always nice.

Our one and only day off yesterday past hosting a massive BBQ at our accommodation for all the companies we're receiving, it's back to work as normal today, although the time for change has nearly arrived and this week we prepare to swap shifts. Until now we as venue staff have been working in two teams of 4, one on the morning 9.00-17.00 shift, and one on the evening 16.00-23.00 shift. We know our shows and we've got a routine down. For the next few days we'll all be in all day so as to learn how the other half does it, before it all gets turned upside down. And on that note, to help make the next few days run smoothly I had better go and create some paperwork listing exactly what I do for each show and each changeover, from setting up a camera to returning a box of lemons to the kitchen (yes, I actually do that).

Hope you're all having an amazing festival, come and visit Venue 13 if you're up at the fringe and get the chance! And if you have any shows to recommend please comment below (although I have only managed 3 shows so far in the 2 and a half weeks I've been here, so no promises I'll be able to catch any of them…) 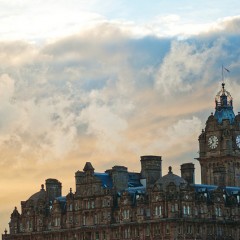 This second blog instalment comes to you from a teal blue portacabin-box-office outside venue 13, at this year's Edinburgh Festival Fringe.