I looked into why they can be frowned on and how amateur companies can improve! I love both professional and amateur showings of productions. They both have so much research, love and passion in them. I hope you enjoy my blog about amateur theatrical companies.

Amateur Companies are around us everywhere! Don`t believe me? Well, they are! They aren`t as well known as the Marlowe Pantomime or the big West End shows like Wicked, but the big question is are they frowned upon by these big shows and audiences? Amateur companies are small groups of passionate performers that gather weekly to plan, rehearse and perform a show with no pay at the end of it all! They do it for the love of the theatre. Whereas, the professional companies are passionate about the arts, they do get paid. Does money make any difference in the production and the people in said production? This is what I set out to find.

My first point is the main one. Money. It is said that money makes the world go round, but is that the truth when it comes to theatre? Does a professional company that has the money, produce a better show than an amateur company that has less money? I asked many people this question via a tally chart for statistics and a questionnaire. Many people thought that money was a large contender in the production quality of the two different companies, but not the largest contender. 6 out of the 34 answers on my tally chart talked about money. The argument being that the more a company has money the more appealing the show can be. This is through the stage they can build and the venues they can hire and even the show they can do! If a company puts on Rocky Horror Show at the Marlowe Theatre with this revolving, light up set, then people will want to see it more as that is exciting and appealing for the eyes. Whereas, amateur companies do not have the budget to have a great big revolving set with loads of effects, but they do build all the set themselves, in fact, they do everything themselves. I have worked on an amateur company show before where I had to do prop work and makeup work and I witnessed first-hand the amount if hard work and love that goes into everything. I hand stitched the hair onto a prop before to make it more lifelike and similar to the actor in the role, the prop was a "guy" used on bonfire night. So, money doesn't seem to make the theatre world go round, but it certainly helps. When getting some answers via questionnaires from people, many of them couldn`t answer the question ""do you think professional companies produce better work than amateur companies?" This question links to the staging and economical side to my argument. "Not necessarily, both can produce amazing pieces" said one questionnaire. This tells me the audience members appreciate both companies in terms of production and money. That there is more money in professional companies but amateur companies do put in more time and effort for a small group of people.

Another point that seemed to be brought up a lot was advertising. Are amateur companies being pushed aside because they cannot advertise as much as professional companies? This ties in with the issue of money again, as posters are not free but the main issue is that if amateur companies could afford big banners to put up, would they get a bigger audience? The answer is yes. From further research of my questionnaires, everyone mentioned advertising and how much more interested and educated them would be on the work amateur theatrical companies did if they advertised clearer. I spoke to Luke Fruin, who manages the social media and marketing for the Herne Bay Little Theatre. I asked him how he thought that amateur companies could be recognised more and he replied with "A professional approach to marketing could help. If the marketing of amateur companies blended into that of professional marketing, audiences would make their choices without their usual biases." This therefore supports the point that amateur theatre companies should widen their advertising works to suit more of a professional standard. But then comes the question of money. Amateur companies do not have as much money as a professional company, as stated before. So, how do they do this? I did some research of how the Herne Bay Musical Theatre Society advertised for their first show. They went into the streets of Canterbury wearing society shirts and handed out leaflets. Sure, it's not really of professional standard, but they sold seats and got their name out there nonetheless. This now tells me that amateur companies are being regarded in the public eye as 7 out of the 8 people on the tally had seen an amateur show. If that be through a friend, poster or school. Amateur companies are getting their names out there, they just need to take extra steps to get people outside of the community to hear of them. To link this to my question, I do think audiences frown on amateur companies as they do not have the ability to advertise in ways they are used to by professional companies, they have to try more abstract methods like standing in the streets with posters.

My final point I wanted to discuss under the theme of amateur and professional companies in theatre was passion. We all know that we do what we do because we have a love for it, even if it's walking the dog! You do it because you love dogs! So, it's safe to say that both professional and amateur companies have a love for the arts otherwise they wouldn`t do it for a living/hobby. But the argument here is a big one, are amateur companies more passionate about theatre than professional companies? I asked a question on my questionnaire which alluded to this theme, that being "do you think amateur companies should be recognised more for the work that they do?" and everyone stated yes, because of their passion. One questionnaire said "defiantly as they work incredibly hard to produce their performances" and another said "the level of effort showcased by amateur productions is deserving of more recognition." Both of these quotes state that there is a great sense of passion in amateur companies, this is because they put in so much effort into their shows and do not get paid. For example, Nick Bosworth, the head of the Herne Bay Musical Theatre Society is an actor, first singing teacher and helps to produce set and props. Therefore, he does a lot more than the average actor on a professional show, this is because people in amateur are trying to make themselves as knowledgeable about theatre so they can be as good as the professionals. So, are amateur companies more passionate? Now this a tricky question. Professional companies are every passionate about what they devote as West End actors devote 8 shows a week to that production which takes up a lot of time, yet, they get paid for it all. Whereas, amateur work many roles on a show they fund for and don't get paid for it. Therefore, they are both passionate about what they do, but it does seem that amateur company members are devoted and passionate enough to do it with no pay, just for the fun. Therefore, for this point, it seems that professional companies and audiences do not frown upon amateur companies for the devotion and effort they put forward to their love for the arts.

Overall, I do think that in some ways, audiences do look down on amateur companies as they seem them as lesser than the professional companies as of the money and advertising issues. This is because audiences are so used to seeing more professional companies reaching out to them because they have the ability to advertise as such e.g. the Marlowe advertise all over Canterbury for their annual pantomime. But, audiences definitely do appreciate the amount of effort and passion that amateur companies put to their work. Amateur theatrical companies are getting noticed more as people on my tally chart had heard of quite a few amateur companies and the shows they had produced and some of them even said that they would prefer to see an amateur show over a professional one. So, amateur companies are not frowned upon as much now as they are getting noticed more and more, they just lack in certain areas, mainly to do with money but their love for theatre is overwhelming. 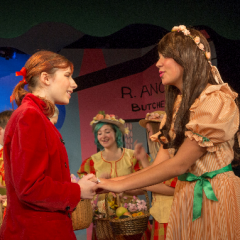 Are amateur theatrical companies frowned upon?