Spielberg's Oscar nominated ‘The Post’ acts as a vital reminder of the democratic value journalism holds, and our need to vigilantly protect it.

Steven Spielberg's latest cinematic release, ‘The Post’, may appear to be the typical high-brow, politically charged docudrama which earns a respectable number of nominations during award season, yet has no one willing to bet on it actually taking home the trophy. However, it also happens to be a hugely vital and relevant piece of art which tackles our “post-truth”  and “alternative facts” culture into the mud.

In a recent interview with The Guardian, Spielberg defended his belief in “only one truth, which is the objective truth.” It is this objective truth that he highlights in his film as being necessary to defend, and above all advocates the press’ role to protect it. Whilst ‘The Post’ may be overshadowed by other nominees this awards season, it holds a distinctive position in its role of reminding us of journalism’s duty to deliver truth, and our collective duty to protect it.

The narrative surrounding Katherine Graham’s decision as manager of The Washington Post to reveal the Pentagon Papers, revealing that Nixon’s administration were aware they couldn’t win the Vietnam War early in the military campaign, is highly intriguing. However, before Spielberg can begin to examine the boardroom politics of broadsheet journalism, visceral scenes of guerilla warfare in the Vietnam jungle act as a poignant reminder of the substantial human cost of government deceit. The film continuously exhibits dark reflections of our own contemporary world, with Streep capturing echoes of the “Me Too” movement in her performance of Graham’s confrontations with male board members who seek to control the fate of the paper. There are also frequent unspoken parallels between Nixon and the current administration, as a shadowy figure in the Oval Office launches a prior restraint injunction against the paper from publishing the papers.

The threads of deception which weave through the film’s plot, both in Nixon's active falsehoods and the passive possibility of Graham sweeping state corruption under the rug, certainly hits home. The press is entering a new age in which its role, as well as its reliability, is being questioned more than ever. During his campaign and throughout his time in office, President Trump has made frequent attacks against CNN, MSNBC and the New York Times, labelling these publications and broadcasters as “liars”. Most recently, he publically accused CNN of scripting questions for teenage survivors of the Parkland High School shooting; a claim CNN vehemently denies. With events such as these in mind, it is certainly understandable why Spielberg dropped all his previous projects in order to produce this film within a staggeringly short eleven months.

Not only is Trump leading a wholly undemocratic attack on the press, but he is also endorsing conspiracy theories and unverified sources, which has further created ripples of uncertainty over who the general public can trust. Donald Trump Jr. recently liked tweets of a online conspiracy theory suggesting David Hogg, a teenage survivor of Parkland, had been coached by his formerly-FBI father into disparaging guns and the 2nd amendment to cover up for the FBI’s failure to prevent Parkland high school shooting. With actions such as these leading to misleading claims of “alternative facts”, it is clear the very nature of modern journalism is growing ever more unstable. Sources who were generally accepted as trustworthy and having a political leaning are now considered to be deliberately spreading falsehoods.

There is plenty of value in questioning the reliability of information, and as consumers of rapidly produced content due to social media, we should be eager to interrogate what we are told. Informed and constructive debate is fundamental to a working democracy. However, the role of the press isn’t to tell us what to think; it is to present the “objective truth” and allow us to form our own conclusions from that. Katherine Graham’s decision to reveal the truth behind government corruption and deceit which affected thousands of families across the country has been applauded as a key moment for press transparency. But, in the film’s frequent allusions to our current political climate, we are forced to consider how a modern equivalent to the pentagon papers would be received. With the history of the US administration’s attacks on the press, it is difficult to imagine a similar event being hailed as a vital triumph for free speech.

Despite the consistent attacks on the press, trustworthy journalism isn’t dead. Every news source has the right to report verified sources and interrogate those within positions of power. As a young person hoping to develop a career within journalism, films such as ‘The Post’ are an inspiring and poignant reminder of the neglected significance of the press. By seeing optimistic messages of everything the press can achieve, we also see the depth of what we stand to lose if this important democratic institution is diminished. Spielberg has certainly given us a timely reminder that journalists’ duty to hold those in power to account through revealing hidden truths was, and still is, a risk worth taking. 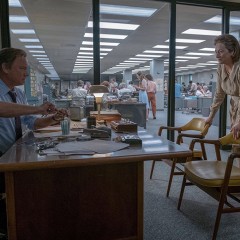 Spielberg's Oscar nominated ‘The Post’ acts as a vital reminder of the democratic value journalism holds, and our need to vigilantly protect it.