We round up those special performances that had you on the edge of your seats or dancing like no-one was watching!

Anyone who has ever been to a gig or watched a particularly gripping piece of theatre will tell you there is nothing quite like it. The sense of immersion, the collective anticipation of the audience, the tingling down the spine as for that briefest of periods you lose yourself in the outstanding display of talent laid out for your delectation.

Similarly, those who perform live know that there is something so raw and vulnerable about being in front of people. There is no retake, no editing. What you do is what the audience sees.

Live performance brings people together and allows them to share in a moment. It can show strength, unity, and solidarity. It can evoke emotion, and above all, it an entertain like nothing else.

In no particular order, here are our Top 10 Live Performances of 2017.

Organised by Ariana Grande after the bombing of her concert two weeks earlier, One Love Manchester demonstrated the kindness of humanity, the importance of tolerance and gave a big middle finger to those who try to tear people apart. It was held in the Old Trafford Cricket Ground, and 50,000 people attended - with 50 other countries around the world tuning in live. Performing were big name acts such as Justin Bieber, Coldplay, Little Mix, Robbie Williams and Liam Gallagher.

A special mention also goes to the We Are Manchester gig that was held to mark the reopening of the Manchester Arena.

Is it really a Top 10 list without a mention of Ed Sheeran on it? The redhead from Suffolk has had a fantastic year with his third album Divide debuting at number one, and multiple singles also topping the charts. Likewise, Stormzy has only gone from strength to strength, with his own debut album Gang Signs & Prayer becoming the first grime album to reach number one in the charts. So it’s not surprising that people went crazy when the two joined forces on stage to blow away the hordes of adoring fans.

Lin-Manuel Miranda’s American history inspired musical is pretty an essential part of live performance lists, owing to its deliberate use of multicultural cast, fusion of musical styles and numerous awards. It also helps that they ended 2016 by rebuking Trump’s Vice-President Mike Pence. Since then it has only grown and expanded. It was announced in early 2017 that a film adaptation was in the works. More exciting though was the opening of the West End production in the newly opened Victoria Palace Theatre, produced by Cameron Mackintosh.

The world shed a tear at the news of George Michael’s death at the end of last year and tributes came in hard and fast. To choose just one is a challenge, but for its emotionally charged performance and haunting vocals we have decided to pick Adele’s cover of Fastlove at the Grammy Awards. The singer actually started off a bit rocky and, in typical Adele fashion, swore before restarting.

The above video is footage from London but 80’s rock legends Guns N’ Roses have been touring throughout 2017. In itself not a huge deal, but when you realise that this is Guns N’ Roses with Slash, Axl and Duff McKagan back together again. Any questions about age or ruined vocals can be wholeheartedly dismissed, as you can see they are all still masters of the craft of live performance. Their tour is currently the highest grossing of 2017, and estimated to be the 6th highest grossing ever. Rock on.

Another tribute performance, this time to The Purple One, aka The Artist Formally Known as Prince, AKA Prince, aka Love Symbol and so forth. It wasn’t just doves that cried when he passed away last year, and his memory was honoured with an electric performance at the Grammy Awards by Bruno Mars and The Time - whom Prince had a longstanding tumultuous relationship with. Mars, dressed in a purple sequined jacked and white shirt came out and blew the audience away with Let’s Go Crazy before breaking out a shredding guitar solo.

You would be forgiven for thinking that there is nothing too impressive about lip-syncing, at one point of another we’ve all done it. But Lip Sync Battles have become a popular medium in the last few years, and Tom Holland delivered a performance this year that is going to be hard to top. Starting innocuously enough with Gene Kelly’s Singing in The Rain, it soon got raunchy as the song morphs into Rihanna's Umbrella, and Holland was dressed to match. I reckon it’s fair to say that Holland blew all competition out of the water.

Nudity, offensive humour and parody songs - this show had it all. Chosen as Tom’s pick of the Fringe for the out-and-out hilarity these sketch show gimps managed to create from situations you wouldn’t dare laugh at in a work situation. They demonstrated a real ability to bring out our twisted side, with jokes about Madeleine McCann, Painting with Hitler and a truly warped take on ‘shag, marry, kill’ leaving audience members in stitches. Definitely one to watch, but maybe not with elderly relatives...
Read the review

Chosen by Cath, our very own Development Manager, Kurupt FM is a pirate radio station on BBC Three’s People Just Do Nothing. The crew have transcended from the screen and have been doing live gigs and have even been signed XL Recordings. They have also been busy performing at festivals such as Reading and Glastonbury, and it is their performance at the latter which won them a place on this list.

Not your typical performance but notable for the sheer amount of money they have raised. For those of you who don’t know, the Yogscast are a media production company who made their fame on YouTube playing Minecraft. They are now a YouTube network with multiple channels under their brand, and also do a lot of streaming over on Twitch. For the last five years they have hosted a charity drive throughout December, and this year they hit $1m in their first day and at time of writing have raised nearly $4.7m through donations from people watching their livestreams. The charities supported are: Wallace & Gromit's Grand Appeal, Mental Health Foundation, Cancer Research UK, Whale and Dolphin Conservation, Special Effect and Save the Children. 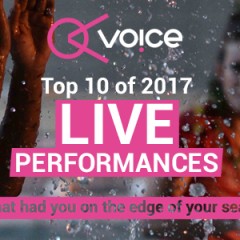 We round up those special performances that had you on the edge of your seats or dancing like no-one was watching!