There's a lot of news and comment ground to cover here. First, I'll try and fail to summarise the events briefly.

Two weeks ago, the Harvey Weinstein scandal sent shockwaves around the world as evidence emerged that one of the most powerful figures in Hollywood had a revolting history of sexual aggression. At the time of writing over 50 people including Angelina Jolie, Cara Delevingne and Lysette Anthony have accused Weinstein of sexual advances, harassment, aggression and rape over the last thirty years. Rose McGowan immediately and outright accused him of rape leading, controversially, to her suspension from Twitter.

As more and more victims came forward, the Internet responded with the ferociously positive #MeToo wherein celebrities and laypeople across the world started to speak about their experiences as victims of sexual aggression. The impact of these stories was in how few of them were reported down to shame or fear and, when they were reported, how little action and justice ensued.

As the dust began to settle, The Guardian reported on the pattern and tradition of sexual aggression within the arts industry. The scathing indictment of the arts caught traction on the Internet.

Earlier last week, it and every other major global news item was overshadowed by a double whammy: the as yet increasing emergence of evidence of sexual harassment and aggression by one of the world's most revered actors, Kevin Spacey stretching twenty years and the release of a redacted version of a 'dirty dossier', an Excel spreadsheet with details of allegations of sexual impropriety against 36 Conservative MPs.

The MPs listed varied from backbenchers to the Cabinet members Stephen Crabb, Mark Garnier and Michael Fallon. Labour MP and Former Shadow Secretary for the DCMS, Kelvin Hopkins has also been suspended from Parliament as the investigation takes place.

While all of this continues to, simply put, get worse, people – the accused and others – have proceeding to stick their foot well and truly into their mouths. Namely, Michael Gove had to apologise after going on Radio 4 and making a lewd reference to Harvey Weinstein:

"Sometimes I think going into the studio with you, John, is a bit like going into Harvey Weinstein's bedroom. You just pray you emerge with your dignity intact."

Worse though, in his statement after accusations emerged, Kevin Spacey appeared to extricate himself from full blame by revealing that he is gay in a move that incensed people for re-stigmatising the gay community and diverting attention away from the accusations. 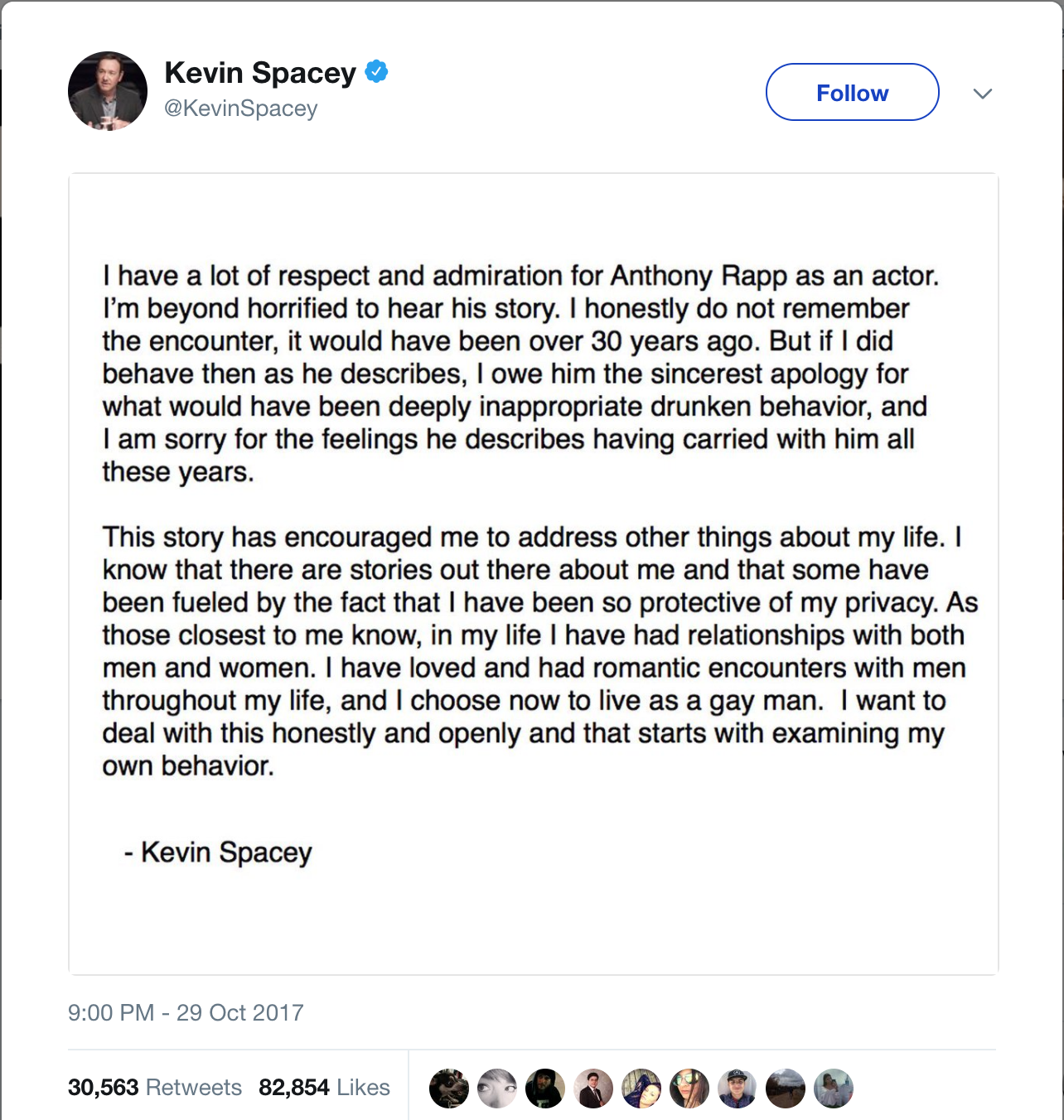 The Star Trek: Discovery actor, Anthony Rapp, came forward to say he was the victim of a sexual advance by Spacey when Rapp was 14 and Spacey 26. On Friday, crew members on Netflix's House of Cards, which Spacey leads, came forward highlighting that his behaviour was neither a one-off nor the behaviour of his youth – not that these are excuses to levy. House of Cards has since been cancelled and the next series pulled. An allegation coming from a young actor who alleges that Spacey touched him inappropriately while Spacey was Artistic Director at the Young Vic Theatre in London makes it a case for Scotland Yard who also take on investigations into MPs – linking Hollywood to Westminster in the most skin-crawling way possible.

Elsewhere, Giles Coren wrote an article in The Times about how Harvey Weinstein has made it so that men can no longer act "manly" with women without fear of accusations of sexual impropriety.

Re-emerging from this, the latest scandal to hit Hollywood, are the well-documented allegations of a top-tier paedophile ring. Corey Feldman went on the talk show The Dr. Oz Show and alleged, for the first time in such direct terms, about how he was raped as a young performer by actor Jon Grissom. Charges were never pressed though Grissom is now serving a prison sentence for child molestation. This isn't the first time he'd spoken about his experiences but it was the first time he'd named names. He also revealed that his lawyers discouraged him as an adult from giving names in public. The fear now is that this could open up barely healed wounds about a similar historic tradition in Parliament.

In the later part of the week, fresh accusations emerged against yet further revered actor Dustin Hoffman, this time – at least so far – limited to early on in his career. Hoffman's erratic behaviour on-set is well documented as a proponent of method acting. Seldom, though, in his 60-year career has it emerged as being little more than irritating. It would be wonderful to get through an article without needing to name him but it's important to note that all this happens as numerous historic accusations of sexual aggression against Drumpf continue to be investigated.

Uniting Spacey and Weinstein was the reaction of seeking treatment. Weinstein's story is steeped in contradiction as he was seen by paparazzi shouting that he's seeking treatment for his behaviours. This at the same time as stringently denying the accusations against him leaves the question as to whether there's any behaviour to admit to and treat up in the air. Although he has apologised rather than levying a series of categorical denials, Spacey's seeking treatment does yet more harm for gay people, perpetuating discourse around 'treating gayness' despite this, presumably, not being the spurious kind of 'treatment' Spacey is undertaking.

The relegation of treatment as enough to settle for is deeply dangerous. It's important to notice that treatment isn't enough for laypeople – it does not amount to punishment. We hear defenses that people in the public eye do not necessitate regular forms of punishment because of their value to people who watch and consume them. I believe, however, that, to most people, this does not extend to crime and punishment. In our adulation of the celebrity classes, we pick the strange fruit of accepting that they deserve handouts like tickets to award ceremonies where they aren't being recognised or free dinners at the most luxurious restaurants because there's an element of service to the people. It's sycophantic but superficial. With sexual abuse and rape, 'the people' want justice done.

It is heartening to see Netflix break ties with Spacey, the Academy Awards and the Producers' Guild of America to throw out Weinstein's membership, and the Prime Minister to ask the Defence Secretary to leave the Cabinet (though not Parliament). Similarly, online we read people's expressions lamenting that their favourite actors behave this way – I was certainly particularly wounded by the news about Hoffman.

It's important, though, to look at what we know, hence the need for such a long piece. The last time I wrote something of comparable length was in reaction to the Manchester MEN Arena bombing in June: partly to collate the facts, partly to remind people of the importance of reacting open-mindedly.

The evidence against the accused is overwhelming and so multifarious that coincidence and conspiracy are dangerous grounds to tread. The unabashed microaggression against women in Parliament is infamous. This is of greater worry when you realise that these women are the most powerful in the country.

The diminution of this behaviour as changing room banter is no longer an option, nor is denying it under the guise of postmodern hypersensitivity. The reason this 'banter' isn't tolerated anymore is because the victims now have the voices to be able to fight back – it was offensive decades ago and it's offensive today. The only difference is that we now know better than to commit the crime of letting you get away with it.

Not being allowed to be flirty, touch a colleague on their knee or the small of their back, not being allowed to make a familiar slur, giggle your way out of saying something ill-considered doesn't disadvantage you. It puts an amount of power into the hands of the person who has put up with it since time immemorial to decide for themselves what offends them and tell you as much.

Again, the haunting thing is that this is far from over. More allegations will emerge from this scandal - though the word scandal in itself connotes a one-off and I can hardly expect this to be a singular, soon forgotten uproar. The possibilities around where it may go next don't bear thinking about but it's not necessarily worth predicting. We must think deeply about this. Victim shaming, slut shaming, rape baiting are the result of deleterious expectations of the behaviours of victims of sexual aggression and need doing away with. 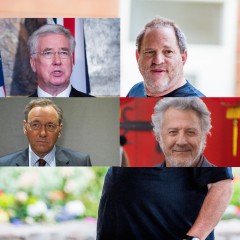 What will become known as the sexual abuse uproar of 2017

There's a lot of news and comment ground to cover here. First, I'll try and fail to summarise the events briefly.